Concerns Regarding Rising Religious Persecution in China Merit a Response 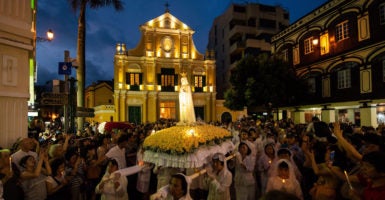 Helen Lamm is a member of the Young Leaders Program at The Heritage Foundation.

From Beijing to Tibet, the Chinese Communist Party is engaging in a violent crackdown on religion, employing tactics reminiscent of the Cultural Revolution.

The recent intensification includes the burning of Bibles and forced closure of major churches, as well as mass detentions of Uighur Muslims and coercive quartering of party officials in their homes in Xinjiang.

Tibetan Buddhism has long been a target of persecution for the atheist Chinese Communist Party, though recent efforts in the suppression of Buddhists have been less violent than measures taken against Christians and Muslims. In 2017, the Chinese government demolished one of the world’s largest Tibetan Buddhist academies, reducing the number of monks and nuns in the area from 12,000 to less than 5,000.

As part of a broad attack on Christians last week in Henan Province, Chinese Communist Party officials broke into Meisheng Church in Luohe, forcibly stopped the service, and violently reprimanded parishioners. Police escorted the church’s pastor away for refusing to sign his violation notice, commenting that “the document will be effective no matter if you sign it or not.”

This attitude illustrates the renewed anti-religious fervor animating the crackdown. Various faith practices must bend to the will of the party whether believers comply, as the Vatican has considered expedient, or not.

China’s Religious Affairs Regulations of 2017  states “citizens have the freedom of religious belief.” Yet, the fine print suggests that lack of compliance with surveillance or sinicization begets punishment without bounds. The regulations on religion took effect in February.

Xi Jinping’s consolidation of power since 2012, and especially since the 19th Party Congress in October 2017, is the driving force behind such regulations. The process included several propaganda campaigns and party purges, as well as the subversive cultural evisceration of China’s ethnic minorities. Xi’s consolidation of power is matched in intensity only by its expansion. China’s renewed focus on military strength as well as its economic influence in the world should not be underestimated.

This summer, the State Department held its first Ministerial to Advance Religious Freedom Worldwide. The event culminated with the release of the Potomac Declaration, which noted that “the threat of physical force or penal sanctions to compel believers or nonbelievers to adopt different beliefs, to recant their faith, or to reveal their faith is entirely at odds with freedom of religion.”

The ministerial also embraced an action plan calling for nations to permit religious groups to assemble freely without onerous regulation like that built into China’s increasing crackdown on religion. In a statement co-signed by Canada, Kosovo, and the United Kingdom, the State Department condemned China for its religious freedom violations.

The situation in China ultimately provides the administration with an opportunity to stand for persons of all faiths facing challenges in China and to demonstrate that the U.S. will continue to be a beacon of liberty for those living under repression.