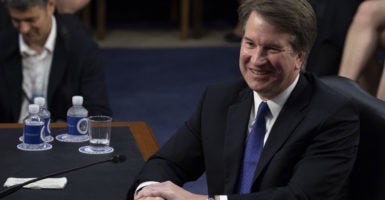 “I am here today because I know Brett Kavanaugh, Brett Kavanaugh is a good man who is incapable of mistreating anyone,” Cathie Martin says of the Supreme Court nominee. (Photo: Alex Edelman/SIPA/Newscom)

Women who have known Supreme Court nominee Brett Kavanaugh personally and/or professionally gathered Friday to assert that the allegations of sexual abuse against him are false.

“Those of us who know Brett best, now and in high school, know that he is a man of honor, integrity, and compassion. He has always been a good person and is a true friend,” said Meghan McCaleb.

McCaleb has known Kavanaugh since high school and her sister dated him.

“The Brett Kavanaugh I know was there when one of my closest friends lost her husband to [Lou Gehrig’s disease], and he invited my friend’s daughter to the father-daughter dance that first year, and every year since,” McCaleb said at a news conference at the JW Marriott hotel in Washington. “The Brett Kavanaugh I know was days away from his confirmation hearing when my father passed away.”

She added that Kavanaugh skipped his confirmation hearing preparation to be present at her father’s funeral, then “prepared all afternoon for his hearing, and then asked if he could stop by my house that night to chat with my mom and my family.”

McCaleb was joined at the press conference by more than 70 other women who either knew Kavanaugh as peers in high school or as professional colleagues to share their stories and why they don’t believe the allegations of sexual assault from Christine Blasey Ford.

Ford, now a 51-year-old research psychologist in Northern California, told The Washington Post that Kavanaugh held her down, groped her, and tried to remove her clothes in a bedroom during a house party in the early 1980s in Montgomery County, Maryland.

Kavanaugh has categorically denied the charge.

“I have known Brett Kavanaugh since high school. I dated him briefly in college and have remained friends with him ever since,” Maura Fitzgerald said.

“The allegation against Brett is inconsistent with everything I have known about him as a person,” she added. “In both public and private, Brett treated me and everyone I know with respect. He has always been kind and good-natured. He has always been caring and concerned with the well-being of others.”

Sara Fagen, a friend and former colleague who worked with him at the White House during the presidency of George W. Bush, said “women from every phase of Judge Kavanaugh’s life, those who know him best, have stepped forward to say that the allegation being leveled against him is false, and we are proud to stand with Brett.”

“Our friendship was forged on 9/11, the fateful day when many of my colleagues and I hastily left the White House after being told by a Secret Service agent to run as fast as we could,” Fagen said.

“Within seconds, I was in a sea of strangers walking up 17th Street, scared and alone, with nothing in my pocket. I looked up, and there was Brett Kavanaugh,” she said. “My colleague took care of me that day. He made sure I was safe, had food and money, and also made sure I got home safely that evening.”

Ford reportedly wrote a confidential letter in July describing the alleged incident and sent it via Rep. Anna G. Eshoo, D-Calif., to Sen. Dianne Feinstein, D-Calif., who serves on the Senate Judiciary Committee, which is weighing Kavanaugh’s nomination to the nation’s highest court.

The last-minute accusation prompted the postponement of the committee’s scheduled vote Thursday on the nomination, which then would have gone to the Senate floor for an up-or-down vote.

Kavanaugh, a federal appeals court judge since 2006, is expected to testify again next week before the committee, and the panel has reportedly given Ford’s attorney until the end of the day Friday to work out the details of a hearing to review Ford’s allegations.

Laura Cox Kaplan, another friend and former colleague of Kavanaugh, who said she grew up in Rising Star, Texas, miles away from where Kavanaugh’s wife, Ashley, grew up, said she is close friends with the Kavanaugh family and is disheartened by the allegations against him.

“I am heartbroken over the way that this precious family has been treated,” Kaplan said. “What saddens me the most is the fact that I know this person, Brett Kavanaugh, to be a person of the highest moral character and integrity, one who is humble, who puts others before himself, and someone who is beyond well-qualified for the position of the Supreme Court.”

Cathie Martin, another friend and former White House colleague of Kavanaugh, who has known him for more than two decades, said he is of impeccable character.

“He is one of the most decent, honorable, and good-hearted people I know. He is a man of high integrity and character,” she said. “I have never seen him be anything but a true gentleman in all aspects of his life.”

“I am here today because I know Brett Kavanaugh,” Martin said. “Brett Kavanaugh is a good man, who is incapable of mistreating anyone.”