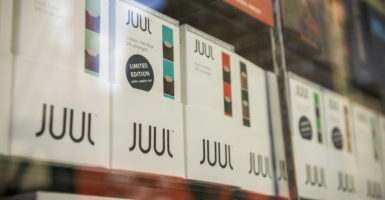 The Food and Drug Administration warns that it is cracking down on Juul Labs and other makers of electronic cigarettes. (Photo: Richard B. Levine/Newscom

Teenage use of electronic cigarettes has reached “an epidemic proportion,” the Food and Drug Administration says, and makers of the devices have less than two months to show comprehensive plans to reduce teen vaping, or face sweeping fines and regulations.

The FDA’s order Sept. 12 is part of the government’s largest-ever coordinated compliance effort targeting makers and sellers of electronic cigarettes, the agency said in a press release.

The FDA said it may remove the products from the market entirely if Juul Labs, previously accused of marketing to teenagers, and four other major manufacturers—Vuse, MarkTen, Blu E-cigs, and Logic—fail to put an end to sales to minors.

In a statement announcing the actions and a 60-day deadline for manufacturers, FDA Commissioner Scott Gottlieb said:

We’re committed to the comprehensive approach to address addiction to nicotine that we announced last year. But at the same time, we see clear signs that youth use of electronic cigarettes has reached an epidemic proportion, and we must adjust certain aspects of our comprehensive strategy to stem this clear and present danger.

Teen vaping, which refers to the use of electronic cigarettes, has been on the rise.

E-cigarettes originally were intended for adults who are trying to quit smoking by providing the nicotine craved without the toxins in tobacco. But flavored products sold by companies increasingly have drawn younger consumers and become a fad among students, health officials worry.

Many of these young people are not smokers, officials say, but become addicted to nicotine through use of the products.

“I use the word epidemic with great care,” Gottlieb said, adding:

E-cigs have become an almost ubiquitous—and dangerous—trend among teens. The disturbing and accelerating trajectory of use we’re seeing in youth, and the resulting path to addiction, must end. It’s simply not tolerable.

In its annual National Youth Tobacco Survey, the FDA said electronic cigarettes were the most commonly used tobacco product among middle school and high school students for the fourth year in a row, with more than 2 million students using e-cigarettes in 2017.

But Daren Bakst, a senior economist at The Heritage Foundation, said he disagreed that teen vaping is an epidemic and cautioned the FDA on its threats to remove potentially life-saving products from the market.

Bakst told The Daily Signal that he questions the data surrounding teenage vaping.

“I don’t think the data suggests some type of huge problem, and also smoking is going way down in part because of these vaping products,” Bakst said in a sit-down interview.

“The data is also kind of questionable on these vaping products,” he said. “It may just be simply that the kids are trying one of these products but not necessarily being a real user of the product.”

In targeting teenage use of e-cigarettes, the Food and Drug Administration announced that, after an undercover operation, it had sent more than 1,300 warning letters and fines to retailers that sold popular e-cigarette Juul and other brands to minors.

The FDA threatened civil or criminal charges for companies that allow “straw purchases,” where adults buy the products in bulk online to resell to minors.

“Let me be clear: Everything is on the table,” Gottlieb said. “This includes the resources of our civil and criminal enforcement tools.”

But although teen use is cause for concern, Heritage’s Bakst argued, e-cigarettes and particularly flavored products emerged as a solution to help people quit smoking and should instead be celebrated by the FDA.

“The market has come up with solutions to address one of the biggest public health issues that exist, and that’s smoking. Unfortunately, the government is getting in the way,” Bakst said.

It is unfair to ban a potentially life-saving product that helps people quit smoking out of concerns for teenagers getting access e-cigarettes, he said:

The reality is these flavors are actually appealing to adults who are trying to quit smoking. … You don’t ban beer for everybody because some retailers are not doing a good job of carding kids when they’re selling beer.