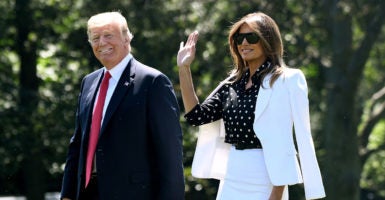 After the Senate passed the Opioid Crisis Response Act of 2018 on a near-unanimous vote of 99-1 on Monday evening, Senate Majority Leader Mitch McConnell, R-Ky., described the measure as “a big additional step to help combat this nationwide epidemic.”

The Senate has just passed the landmark Opioid Crisis Response Act of 2018. This legislation is a big additional step to help combat this nationwide epidemic. #CAREERAct

The House passed a similar bill in June, and the Senate measure’s sponsor, Sen. Lamar Alexander, R-Tenn., said he hopes to meld the two bills “into an even stronger law to fight the nation’s worst public health crisis, and there is a bipartisan sense of urgency to send the bill to the president quickly.”

A record-breaking 72,000 Americans died from the use and abuse of opioids last year alone.

At the White House, President Donald Trump and first lady Melania Trump have drawn attention to the opioid crisis on a number of occasions since taking office in January 2017.

The Trump administration’s work to combat the crisis overlaps with the first lady’s “Be Best” children’s initiative.

Before a rally in Ohio on Aug. 24, the president and the first lady toured the Nationwide Children’s Hospital’s neonatal intensive care unit in Columbus. The facility takes care of babies born to mothers addicted to opioids or who have abused them.

A great visit to @Nationwidekids today. #BeBest supports this Administration’s continued efforts in battling the opioid crisis&the effects it has on NAS babies. Thank you to the dedicated team of doctors,researchers&caring staff who work hard daily to carrying out this mission. pic.twitter.com/rXeJItfqrF

On March 1, the Trump administration held a White House Opioids Summit, at which the first lady made opening remarks.

“Our unified goal is that of helping all who have been affected by drug addiction. And, for me, that means focusing on babies and young mothers, which is something I have been often seeing in my travels,” Melania Trump said.

The White House also hosts a website called “Opioids: The Crisis Next Door,” where everyday Americans can upload videos of themselves describing their experiences with the epidemic.

Although it was launched in March, the site has flown largely under the radar, but could play a major role in removing the stigma of opioid addiction. Many experts say that’s an important first step to combating the problem.

“We believe that it’s important that we speak out, because I’m a person who publicly went through addiction, and everything was negatively said about me. People’s lives matter no matter what the condition of their life is, no matter what their struggle is,” Strawberry said. “Addiction is very powerful. It rules and reigns over a life. It did for mine for many years. I sit here today free and liberated … hope is possible.”

Bolling, whose son Eric Chase died of an accidental opioid overdose last September, cautioned other parents. “Do us all a favor, do yourself a favor, do your family a favor, do your children a favor,” he said. “Have the discussion with them, and do it again. Get involved in your kids’ lives.”

The site also highlights another staggering statistic: This year, more than 2 million Americans will suffer from addiction to drugs, whether legal or illegal.

“Opioids killed more people last year than either car accidents or gun violence. This crisis of addiction can affect any American, from all-state football captains to stay-at-home mothers,” the website says.