Calls for New FBI Probe of Kavanaugh Have No Precedent 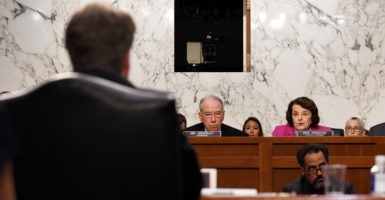 An FBI inquiry into a California woman’s allegation against Supreme Court nominee Brett Kavanaugh would be highly unusual, but wouldn’t necessarily delay a Senate vote on confirmation, legal experts said.

Christine Blasey Ford, a professor of clinical psychology at Palo Alto University in California, alleges that Kavanaugh attempted to sexually assault her when the two were teenagers in suburban Maryland in the early 1980s.

The Senate Judiciary Committee was scheduled to reconvene Monday to hear from both Ford, 51, and Kavanaugh, 53, a judge on the U.S. Circuit Court of Appeals for the District of Columbia since 2006.

But Tuesday night, Ford’s lawyer asked for an FBI investigation into the matter before Ford would talk to the committee.

“Dr. Ford’s request is in reverse order,” Michael J. Clark, a former 22-year FBI agent, told The Daily Signal. “If she does not come forward for a Senate hearing, the Senate is chasing its tail.”

Clark, who lectures in the criminal justice department of the University of New Haven, said the Senate then could decide to ask the FBI to look at the matter further.

“She should testify so senators can determine if she is credible,” Clark said. “If Dr. Ford provides information in a private or public setting, the Senate Judiciary Committee will hash this out to determine if they want to ask the FBI for additional background information.”

Any additional FBI probe would only be in the context of the Senate confirmation process, as Ford hasn’t alleged Kavanaugh committed a federal crime, the only criminal matter the FBI may investigate.

Only the Montgomery County Police Department, presuming the alleged incident occurred in its jurisdiction, could launch a criminal probe. But the county police have said they would not investigate unless Ford filed a complaint.

When doing background investigations for a Supreme Court nominee, the FBI interviews hundreds of individuals, Clark said, including past employers, past and present co-workers, past college professors and classmates.

The interviews produce findings “several feet thick” for the White House, without conclusion, he said.

The FBI’s background investigations even for district court nominees are exhaustive with dozens of interviews, Clark said. But, it is strictly information gathering.

“She may not want to go under oath because there isn’t enough information to say anything,” Powell told The Daily Signal, referring to Ford.

“There wouldn’t be enough evidence for an investigation, much less a prosecution” in a criminal justice setting, Powell said.

This might be complex politically, but it’s a simple legal matter, said Ron Hosko, a former assistant director of the FBI and 30-year veteran of the bureau.

“You don’t need FBI agents to ask these questions,” Hosko told The Daily Signal. “Senators could do this. More than half of them are already lawyers.”

The FBI process is geared toward compiling information in a confidential way to prompt people to speak more freely. Now that Ford’s allegations are in the public arena, however, there is no longer a need for a confidential FBI investigation when a Senate investigation is more appropriate, Hosko and others said.

If the FBI did probe the matter, it likely could do the job in a day over the phone by interviewing Ford, Kavanaugh, and Kavanaugh classmate Mark Judge, who Ford said was in the room when the alleged assault happened.

Kavanaugh and Judge both have denied the allegation.

“If she could describe the building, or other people she spilled this to, this could require more follow-up,” Hosko said.

The FBI does not make a credibility assessment of any information it receives with respect to a nominee. Nor is it tasked with investigating a matter simply because the Committee deems it important. The Constitution assigns the Senate, and only the Senate, with the task of advising the President on his nominee and consenting to the nomination if the circumstances merit. We have no power to commandeer an Executive Branch agency into conducting our due diligence. The job of assessing and investigating a nominee’s qualifications in order to decide whether to consent to the nomination is ours, and ours alone. …

I sincerely hope that Dr. Ford will accept my invitation to do so [address the committee], either privately or publicly, on Monday. In the meantime, my staff would still welcome the opportunity to speak with Dr. Ford at a time and place convenient to her.

But, the president added, “If she shows up and makes a credible showing, that will be very interesting and we’ll have to make a decision.”

The FBI conducted six background checks, including for jobs Kavanaugh held in the White House and before he became a federal appeals judge in 2006.

Sen. Dianne Feinstein, D-Calif., the ranking member of the Senate Judiciary Committee, revealed the existence of Ford’s letter days before the scheduled vote.

Feinstein launched a tweet storm Wednesday about the need for an FBI probe. She had possessed Ford’s letter since July.

President Trump, Dr. Blasey Ford did not want her story of sexual assault to be public. She requested confidentiality and I honored that. It wasn’t until the media outed her that she decided to come forward. You may not respect women and the wishes of victims, but I do.

No FBI investigation, no outside witnesses, publicly stating Dr. Ford is “mixed up”, & demanding she come before the Senate while receiving death threats. Republicans don’t take these allegations seriously. Before voting on a lifetime appointment, there must be an investigation. pic.twitter.com/ydw6doxLLz

The FBI routinely investigates allegations like Dr. Ford’s. They did it with Anita Hill’s allegations 27 years ago and they did it this year with allegations against Rob Porter. The FBI needs to investigate and the Senate needs to wait until that’s done. pic.twitter.com/Eoi0i3uqFy

Grassley responded in his own flurry of tweets.

Dr. Ford shouldn’t be threatened or insulted & she deserves to be heard. I expect my colleagues on both sides of the aisle to be respectful & treat this situation with the sensitivity it deserves 1/4

We’re going to continue to try to hear from Dr. Ford in any format she’s comfortable w open session/closed session/private staff interviews/public staff interviews bc her information is very important. We’ve provided an opportunity for her to put her story fwd on Monday 2/4

If Senate Dems think they need the FBI to investigate, why didn’t they alert the FBI on July 30? As soon as I learned of the allegations from the Washington Post on Sunday I moved swiftly to follow up on Dr. Ford’s allegations As the FBI has said its role here is complete 3/4

Cmte investigators are following up on the leads from Dr. Ford’s allegations & news stories No other OUTSIDE investigation is necessary for the Cmte to do its investigation. Don’t know why Dems are refusing to cooperate in the cmte’s investigation I hope Dems will join me 4/4

“Demanding an FBI investigation can be an effective sound bite,” Thomas Jipping, deputy director of the Edwin Meese III Center for Legal and Judicial Studies at The Heritage Foundation, told The Daily Signal.

But the FBI has completed its role in the confirmation process, Jipping said, and would have no role in conducting a criminal probe.

“The only possible parallel to this would be the Clarence Thomas hearing,” Jipping said, referring to the late-breaking accusation in 1991 by Anita Hill, a former Thomas employee who accused the Supreme Court nominee of sexual harassment. “In that case, the Senate didn’t deputize the FBI to investigate further.”