Rally in Washington Will Urge Disillusioned Democrats, Leftists to ‘Walk Away’ 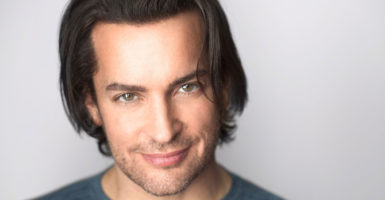 “We are only just over 3 months old [and] we have over 370,000 people who are members of the #WalkAway Campaign who have created testimonials,” founder Brandon Straka says. (Photo courtesy of Brandon Straka)

The founder of the movement that showcases stories of why people are walking away from leftist ideology and the Democratic Party is bringing a march and rally to Washington next month to send a message he hopes the mainstream media won’t be able to ignore.

It’s a milestone for what he calls the #WalkAway Campaign.

“We are only just over 3 months old, and at this point on all social media platforms, we have over 370,000 people who are members of the #WalkAway Campaign who have created testimonials that are a part of it,” Brandon Straka, founder of the campaign, told The Daily Signal in a phone interview.

“No one from the left-wing media has ever even reached out to me for a comment, let alone an interview or to have me on to talk about it,” Straka said, adding:

The march and rally will be held Saturday, Oct. 27. The event will start near the Democratic National Committee headquarters building on Capitol Hill and end on the lawn of the Capitol. The date is 10 days before the midterm congressional elections.

The event includes a gala dinner the night before and a closing brunch the next day.

Some venues and speakers have yet to be finalized, Straka said, but he hopes the rally, march, and related events will send a message that the mainstream media will be forced to recognize.

“We are going to fight back, and that’s when I came up with the idea for the march on Washington, because we are going to get [tens of thousands] … of people together to walk away from the Democrat Party, and we are going to do it in a live demonstration that they cannot dispute,” he told The Daily Signal.

Straka, 41, who calls himself a “gay conservative,” did not always describe himself as such.

“In 2017, I had what is commonly referred to as a ‘red pill experience’ because I was a lifelong liberal and a lifelong Democrat,” he said of his ideological epiphany.

A “red pill experience” is a term some use to describe finding the truth behind a situation, even if it’s hard to accept.

“I voted for Hillary Clinton and I was devastated when Donald Trump won the election, because I had completely bought into the liberal media narrative that Trump was a racist, a bigot, a homophobe, the second coming of Hitler, and that his followers were no better,” Straka told The Daily Signal. “I literally believed the left-wing narrative—hook, line, and sinker.”

Then his onetime babysitter challenged Straka about a post he shared on social media about Trump allegedly mocking a handicapped reporter.

“After I posted about the disabled reporter, she just came to me, and she said, ‘Have you seen this?’ It was a clip from YouTube called ‘Debunking That Trump Mocked the Disabled Reporter,’” Straka said, adding:

It was a compilation of footage showing Trump doing that same exact voice and gesture as he did that day, in numerous circumstances over the years, imitating numerous people, but the commonality was that he was imitating someone who was caught in a lie, or someone who had done something shady, or somebody who was groveling, but … it became clear when you watched it that he wasn’t imitating someone’s disability.

He was imitating someone who happened to be disabled who was caught in a lie.

A self-described actor, singer, and hairstylist turned political activist, Straka told The Daily Signal that the dishonesty of the left was a significant factor in his conversion:

I started doing a lot of research and discovering how dishonest they had been time and time again throughout [the Trump]  campaign, but also just in general.

I really started to see, finally, things started to make sense. Because as a liberal, I was always concerned with social justice and equality and all of these things. But at the same time, a lot of it wasn’t making sense to me because … it’s like the news, and the liberal society would have you believe that black people can’t go to their mailbox without being attacked by police officers and fighting gunfire, and I am not seeing it. …

And I started to really understand that they use race, they use homophobia, they use a war on women, they use all of these things as divisive, wedge issues to further their narrative.

Once again, it all started to make sense to me what was happening.

On May 26, Straka released a video of himself explaining why he was walking away from the Democratic Party and building a platform for folks who shared similar experiences.

He said he hopes the #WalkAway Campaign will foster a supportive community for those who want to leave the Democratic Party.

“There is more of us. I know it,” Straka said. “So I decided rather than just make this about me putting out a video, I am going to create a campaign, and I am going to encourage other people to make their own videos and kind of build this network of support.”

Christopher Wright of the Potomac Tea Party said his organization, which wrote an open letter in support of the #WalkAway movement, will be represented at the October event. He said he hopes those in Straka’s movement will find a home in his.

“Our message is, you have friends in the tea party. Please look at our open letter. It’s on our website,” Wright said. “Our main message is: Take a look at America’s founding principles and consider the tea party. You’ve got friends here.”