Maxine Waters Unloads on Trump: ‘The Most Deplorable, Despicable Human Being’ 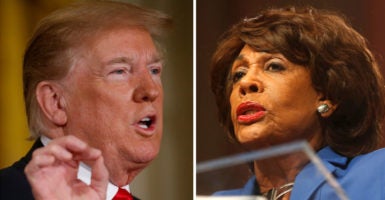 Rep. Maxine Waters, D-Calif., escalated her ongoing feud with President Donald Trump, calling him “the most deplorable, the most despicable human being” and advocating his impeachment.

Introduced as a leader of the “resistance,” Waters spoke for more than 30 minutes about the Trump administration’s policies related to criminal justice. After finishing her prepared remarks, she made her most pointed comments about  the president.

“This is a bad time—to put it mildly. I’ve never seen anything like it in my life,” Waters said. “I think he’s the most deplorable, the most despicable human being I’ve ever encountered. He’s a liar. He’s dangerous. He’s alienated all our allies. And he’s in bed with [Vladimir] Putin, the oligarchs, and the Kremlin of Russia.”

She then called on the House of Representatives to impeach Trump.

“This president is so outrageous and egotistical, he said, ‘I can pardon anybody, and I can even pardon myself.’ Well, he may be able to pardon himself, but we’re able—if we really do our jobs—to get him impeached,” Waters said. “Let’s see if he can pardon himself from that. I don’t think so.”

Earlier this week, Trump responded to the California Democrat’s recent attacks with one of his own.

Crazy Maxine Waters: “After we impeach Trump, we’ll go after Mike Pence. We’ll get him.” @FoxNews Where are the Democrats coming from? The best Economy in the history of our country would totally collapse if they ever took control!

Waters spoke as part of a panel titled “The Dangerous Policies of Attorney General Jeff Sessions and the Trump Administration.” Panelists criticized Sessions for undoing Obama administration policies related to privately owned prisons and for reviving the “war on drugs.”

“I know it is right to fight against separation of mothers and fathers and families because of what happened to us in slavery,” she said. “They sold us on the auction block. They sent the father to one plantation. They sent children to other plantations. … They separated us.”