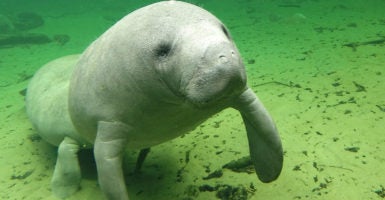 Lawmakers who passed the Endangered Species Act four decades ago inserted a “degree of ambiguity” in key terms that led to most legal controversies surrounding enforcement of the law, the Interior Department’s No. 2 official said in a presentation at The Heritage Foundation.

To resolve such questions, Deputy Interior Secretary David Bernhardt said, the Interior Department joined with other agencies to propose changes aimed at providing “clarity and predictability” to regulations covering endangered or threatened wildlife.

“We are intent on maintaining our environmental standards, but we are equally intent on leaving a reliable, efficient, and defensible regulatory regime in place that better serves the American people than what we found when we walked into the department, and I’m confident that we’ll be able to do this,” Bernhardt said in his speech Sept. 10.

The Trump administration announced proposed revisions in July that primarily address two sections of the Endangered Species Act of 1973.

One of them, Section 4, involves procedures for listing species, recovering species, and designating critical habitat, the term for areas identified as essential to conserving a species. The other, Section 7, covers consultation among federal agencies to make certain no actions undermine endangered or threatened species or hurt critical habitat.

The Trump administration proposes to revert to an earlier practice of considering areas occupied by a species before examining other areas. The proposed revisions are meant to clarify when the unoccupied areas are essential for conservation.

Designating critical habitats isn’t always prudent, federal officials say, so the administration proposes a “nonexhaustive list of circumstances” where that action may not apply, according to a U.S. Fish and Wildlife Service press release.

Interagency consultation “is a place where the rubber really hits the road in the implementation of the Endangered Species Act,” Bernhardt told his Heritage Foundation audience at the think tank’s headquarters on Capitol Hill.

Throughout his talk, the deputy interior secretary used a Venn diagram with three overlapping circles to illustrate three key factors in implementing and enforcing the law.

Problems occur “when federal administrators stray too far into the red area while ignoring the green,” Bernhardt said, adding:

That’s where we end up with courts explaining to us that we haven’t followed the law where we seek purely to apply our policy outcome, or we conversely rely on facts and ignore the law. That’s where we have impermissibly engaged. … We have to be true to the law, and we have to use policy views that are grounded in the context of what the act says.

Under the Endangered Species Act, the conservation process involves “use of all methods and procedures which are necessary to bring any endangered species or threatened species to the point at which the measures provided … are no longer necessary.”

Federal officials consider endangered species to be those at the brink of extinction, and threatened species as those likely to be extinct in the near future.

Because Congress used its own definitions of endangered and threatened species and “didn’t precisely use the terms of art that biologists use,” Bernhardt said, the lawmakers were responsible for creating a certain “degree of ambiguity” that has “led to most, or many of the controversies and cases surrounding listing designations.”

“It is in those areas where something is sort of red that agencies must use the most care to ensure that their interpretations are well-grounded in the law and actually in the facts,” he said, referring to the Venn diagram’s color for official discretion.

Bernhardt pointed to the law’s definition of “threatened species” as an example of ambiguous language that could become problematic. The law is referring to a species likely to become in danger of extinction within the “foreseeable future,” as opposed to a species in imminent danger.

The administration’s proposal includes interpreting “foreseeable future” to mean “only as far as [officials] can reasonably determine that both the future threats and the species’ responses to those threats are probable,” according to the Fish and Wildlife Service press release.

Daren Bakst, senior research fellow in agricultural policy for The Heritage Foundation, served as host for the event featuring Bernhardt. In an email, Bakst told The Daily Signal that the law is in “dire need of change.”

“The Endangered Species Act of 1973 has failed to achieve its purpose of conserving species. When only about 3 percent of listed species are recovered and delisted, that is a real problem, and worse, much of the costs come at the expense of property owners,” Bakst said, adding:

This is why it is important to distinguish between protecting endangered species as opposed to protecting the Endangered Species Act. The latter is in dire need of change. Only Congress, though, can change the statute itself.

However, the Fish and Wildlife Service and NOAA Fisheries [Service] can take actions to better implement the ESA [Endangered Species Act]. To their credit, these agencies have proposed to do just that …

These proposed rules will help property owners by making the regulations more clear and recognizing that federal intervention should not be expanded to unjustified and legally indefensible levels. During the presentation, it was refreshing to hear the deputy secretary discussing the limits to agency authority and his respect for separation of powers. …

By better focusing on the actual problems and developing solutions better suited to individual species, the agencies will be in a position to help increase the number of recovering and delisted species.

The proposed rule changes may be seen here, and comments may be viewed and made here. The public comment period ends Sept. 24.

The agencies already have received more than 11,500 comments, Bernhardt said.