How the Chinese Government Is Suppressing Religious Groups 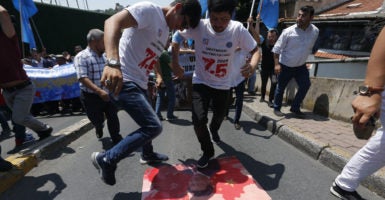 The following is a lightly edited transcript from The Daily Signal’s Sept. 11 podcast episode.

Katrina Trinko: Modern China has never been friendly to religion, but according to the Associated Press, things have been getting worse under President Xi Jinping.

The AP reports: “Experts and activists say that as he consolidates his power, Xi is waging the most sever systematic suppression of Christianity in the country since religious freedom was written into the Chinese constitution in 1982.”

The New York Times recently reported on the increasing crackdown on Chinese Muslims and Sen. Marco Rubio, a Republican from Florida, tweeted Monday: “Imagine what life would be like for our children if they inherit a world in which the most powerful country is one that burns Bibles, ransacks Christian churches, and rounds up and detains Muslims in internment camps. Because that is what China is doing.”

Joining us today to discuss is Olivia Enos, a foreign policy expert at The Heritage Foundation. Olivia, what’s going on in China right now?

Olivia Enos: The situation in China is really severe. We’ve seen as Xi Jinping has attempted to consolidate power in China, one of the first things that he’s gone after has been freedom of religion. And we’ve seen this through a number of different measures that have been really concerning.

In particular, there’s this trend known as sinicization, which is affecting all religions. Essentially, sinicization is the secularization of religion. And not just the secularization, but also this move toward making religion serve the Chinese Communist Party’s ends. So it’s trying to divert allegiance in many ways, but primarily just to serve the Chinese government’s primary goal of consolidating power and of having that type of allegiance.

And we’ve seen particular actions that have been taken in February of this year. We saw the institution of regulations on religion, which have significantly heightened government oversight and restrictions on people of all faiths practice of that religion.

Daniel Davis: So how does this compare with some of the recent trends in China? I mean, Xi Jinping just started his second term, right? So he had a previous term where he didn’t have quite as much power, and there was an era before where people could be religious and go to church, and things like that. And this seems different.

Enos: Yeah, I think this is definitely different. We saw after the last People’s Congress that this is really when he started to crack down on religion.

These days, we’re starting to hear really horrible tales of Christians who are having their Bibles burned, their churches shuttered, pastors being detained at high record levels. And this has all been happening over about the past five years, but has been intensifying in particular over the last year or so.

And it’s not just Christians that are being impacted by this. We’ve been hearing absolutely horrific reports out of Xinjiang, which is the western region of China where there is a predominately Muslim minority known as Uyghurs.

Beyond what’s going on in Xinjiang, you also have horrific abuses occurring in Tibet where the Chinese have instituted this sort of grid-style social management, which you see in Xinjiang, but also in Tibet as well. There’s surveillance everywhere. In every monastery. On every street corner.

In Xinjiang, there are even Chinese Communist Party officials moving into the homes of individual families. This is perhaps the grossest violation of not only personal privacy, but certainly of religious freedom because when they have the Chinese officials living in their homes, they’re being asked to denounce their Muslim faith. It’s happening in particular during Ramadan season when they’re being forced to eat pork and violate core tenants of the Muslim faith. It’s really gotten out of control.

Trinko: Wow. That’s just horrifying to imagine, as a religious person—having that sort of control over you. And for someone like me who’s not very familiar with China’s laws, is it technically illegal to practice religion of any extent?

These Uyghurs being sent to these internment camps, these Christians having their Bibles burned, were they doing something that was viewed as illegal that the state had previously turned a blind eye to? Or is this as new law? Or what’s going on?

Enos: The Chinese government would say that technically everyone has the right to religious freedom and to practice their faith. But in practice, we know that that is the complete opposite from reality.

There have been significant restrictions that have been put in place or have been more enforced in recent years, but there are actually new regulations from February 2018 that make the practice of religion increasingly difficult.

For most faith practices, people recognize that your childhood is sort of a formative time where you’re developing those various beliefs. And the Chinese government recognizes that and is making it impossible for families to raise their children in the way that they see fit under the religious beliefs that they believe to be true.

Davis: Do you expect any U.S. or international response to this that would significantly try to block what they’re doing?

Enos: Sam Brownback, who is the current ambassador at large for the International Religious Freedom office at State, convened a really fantastic international religious ministerial earlier this year where there were strong condemnations of China’s persecution of people of all faiths.

Both during that time and since that time, Brownback as well as, I believe, State Secretary Mike Pompeo have called for the targeted financial sanctioning of individuals like Chen Quanguo, who actually oversees a lot of the social management that took place previously in Tibet.

He was, I believe, the party’s secretary there but then he was transferred to Xinjiang where he’s been carrying out very similar policies, and they’ve recommended that he be sanctioned under global Magnitsky, which are sanctions authorities that allow individuals to be targeted on humans rights and corruptions grounds.

I think this would be a really positive step forward, because it would send a clear message to Communist Party members that the U.S. government is not going to turn a blind eye to people of all faiths having their religious freedom violated.

I think another thing to do is just to have high level meetings with religious leaders. President Donald Trump, for example, could meet with the Dalai Lama. That would send a really clear signal that he is affirming the right of Tibetans to believe and practice Buddhism in the way that they see fit.

He could also meet with other senior Chinese officials, and in the midst of conversations about other key security issues or maybe even trade issues, he could raise some of these issues and concerns that the U.S. has about the fact that these religious freedom violations are taking place, right? I think there are definitely opportunities to raise these issues and to send a clear signal to China that the U.S. is watching.

Trinko: So why do you think the Chinese government is so concerned about religious practice, and is there anything in particular that led to this most recent round of regulations in February?

Enos: Yeah. I think that the Chinese government, like so many authoritarian governments around the world, recognizes that religion gives an alternative authority to the government and it requires the allegiance of the people to an authority that is, frankly, far higher than the government. So they view that as threatening to their own grip on power, and so often times quell religion.

Religion also promotes a certain freedom of ideas and a freedom of expression that I think you don’t always see with other modes of thought. But in China, of course, they’re not only restricting your freedom of religion, but even restricting access to information or modes of sharing information. The monitoring system, even on the average nonreligious Chinese person, is fairly significant.

So I think that that’s what you see when you view authoritarian governments. They restrict information and it has negative impacts and consequences for the average individual in those countries.

Enos: That’s so true. And Kate, you also mentioned that things have increased since February. There are reports now out, including the Human Rights Watch report on Xinjiang, that are suggesting that the level of persecution in Xinjiang in particular rivals or comes close to the type of persecution that was occurring during the Cultural Revolution. This is very much reminiscent of the type of consolidation of power that we saw under Mao and definitely threatening to people of all faiths.

Trinko: I was wondering if you could speak a little bit more about the situation that the Uyghurs find themselves in. What are these internment camps? It almost seems crazy in 2018 to be discussing internment camps.

Enos: Yeah, it’s amazing that this is still happening today. These internment camps, as the Chinese government would say, are really for the purposes of “re-education.”

Enos: The idea is that they would be educated against so-called extremism. And this is the unfortunate conflation that the Chinese have made, they’ve said that if there’s any sort of religious practice, it must necessarily lead to extremism. But we know that that’s not the case.

They’re experiencing, we’ve heard, even deaths out of these camps. Severe health issues, individuals who have been detained for days, weeks, months. I think some have even been detained for over a year at this point. So this is extended internment.

We barely even know what’s going on, and the Chinese government itself doesn’t even acknowledge that it’s happening. There’s only been one official, I think, who’s even made mention of it, and they wouldn’t call it an internment camp.

Davis: Well, it’s kind of reminiscent of the Gulags in the Soviet Union back in the 20th century. Why do you think there hasn’t been as much international attention put on this? Is it because there’s a lot at stake with China geopolitically that we need it for various reasons, or is it something else?

Enos: You know, I think there are a lot of potential different reasons. I don’t know exactly why. Certainly, we’ve been having a lot of negotiations over trade issues, we’ve been talking to China about cooperating with us on our U.S. strategy toward North Korea. But I think over the long term, the real challenge is actually not so much silence from the international community specifically, but sort of the deafening silence from the Muslim world when it comes to this.

We really have not heard people in the Muslim community crying out on behalf of their Uyghur brothers and sisters, and there just hasn’t been this type of attention. And so I hope that the U.S. government certainly will raise these issues, but I hope we hear some things out of the Middle East and out of other Muslim-based countries that express support for Uyghurs as well.

Trinko: OK. Thank you very much for joining us, Olivia.