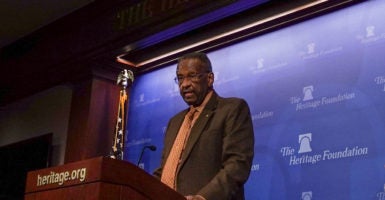 “I think that our government has become destructive of the ends it was created to serve,” Walter Williams, a professor of economics at George Mason University, said in a speech Tuesday at The Heritage Foundation. (Photo: Thaleigha Rampersad)

An author and economics professor warns that America must return to the Founders’ vision of limited government to preserve the economic future of the country.

“I think we can safely say that we have made a significant departure from the constitutional principles of individual liberty and limited government that made us a rich nation in the first place,” Walter Williams, a professor of economics at George Mason University, said in a speech Tuesday at The Heritage Foundation.

Most legitimate functions of government are noted in the Constitution, such as collecting taxes and providing for the common defense and general welfare of the country, and regulating commerce between the states and with foreign nations, he said.

“Nowhere in the Constitution, in the United States Constitution, do we find authority for Congress to tax and spend for up to three-quarters of what Congress taxes and spends for today,” Williams said. “In other words, there is no constitutional authority for farm subsidies, bank bailouts, food stamps, business bailouts—not to mention midnight basketball.”

The latter is a reference to a provision in a federal anti-crime bill in the mid-1990s.

The rise in spending in government, he said, is the best way to illustrate how fast and how much the government has grown.

But that was then, and this is now.

“Today, federal expenditures alone are close to 25 percent of the GDP. State and local governments spend over $3 trillion. The federal government over $4 trillion,” he said. “The average taxpayer today pays more than $10,000 a year in federal, state, and local taxes.”

Williams, a syndicated columnist, urged those in his audience to take ownership of what is rightfully theirs.

“As time goes by, you and I own less and less of our most valuable property; namely, ourselves and the fruits of our labor,” he said, adding:

That is, free enterprise or capitalism has been so successful in eliminating the traditional problems of mankind—such as disease, pestilence, hunger, and gross poverty—that all other human problems appear to us at once to be inexcusable and unbearable.

Williams said Americans need to remember that all of the programs “offered” by the government come at a personal cost and that the government has no resources of its own.

“[T]hose programs coming from Washington or out of your state capitals, they don’t represent congressmen and legislators reaching in their own pockets to send out the money,” he noted, adding:

When we recognize that government has no resources of its very own, that forces you to recognize that the only way the government can give one American one dollar is first through intimidation, threats, and coercion—confiscate that dollar from some other American.

Now if you think I am being too loose with terminology and intimidation, threats, and coercion, you have April 15.

He said that it’s incumbent on the American people to return to the Founders’ vision of limited government to preserve freedom.

“I think that our government has become destructive of the ends it was created to serve,” Williams said. “I think that our Founders would be very disappointed with you and me if they were to come back and see that we have developed a new class of people that prefers safety to liberty.

“But the optimistic note for us is that we Americans have not done the wrong thing for a long time,” he added. “But we better get about setting our house in order while we still have the freedom to do so.”

Williams’ lecture was the first in a new series, “Free Markets: The Ethical Economic Choice,” sponsored by The Heritage Foundation.