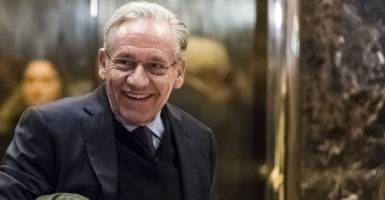 Journalist Bob Woodward in the lobby of Trump Tower on Jan. 3, 2017, as the Trump transition team met in the building less than three weeks before the president-elect took office. (Photo: Albin Lohr-Jones/CNP/Newscom)

So have insults from President Donald Trump and administration officials.

This doesn’t surprise Woodward, who gained fame for his reporting of the Watergate scandal with Carl Bernstein at The Washington Post in the early 1970s, and is the author or co-author of 18 best-selling books, most centered on government and politics.

“You crank [up] the great Washington denial machine,” Woodward told National Public Radio. “I’ve seen this over the years, going back to the Nixon case.”

A key source for Woodward’s Watergate reporting was “Deep Throat,” who outed himself in 2005 as Mark Felt, a deputy FBI director during the Nixon administration. But Felt had made numerous denials over the years that he was the anonymous source behind revelations that led to the resignation of President Richard Nixon

“Time and time again people will deny things,” Woodward said to NPR. “I understand people have to protect their positions. But I’ve done hundreds of hours of interviews with people.”

Trump launched another broadside against the book in a tweet Monday morning:

The Woodward book is a Joke – just another assault against me, in a barrage of assaults, using now disproven unnamed and anonymous sources. Many have already come forward to say the quotes by them, like the book, are fiction. Dems can’t stand losing. I’ll write the real book!

“A number of people have come forward to say that Woodward never even reached out to corroborate statements that were attributed to them, which seems incredibly reckless for a book to make such outrageous claims, to not even take the time to get a $10 fact-checker to call around and find out if half of these quotes were accurate,” Sanders said. “It seems like a very careless and reckless way to write a book.”

Asked whether the White House considered issuing a list of what the Woodward book got wrong, Sanders said, “That would be a complete waste of our time.”

Here’s a look at six denials so far about the book:

White House chief of staff John Kelly said he didn’t call the president an “idiot,” as the Woodward book reports.

According to “Fear,” Kelly thought Trump was “unhinged” and in a small group meeting said: “He’s an idiot. It’s pointless to try to convince him of anything. He’s gone off the rails. We’re in Crazytown. I don’t even know why any of us are here. This is the worst job I’ve ever had.”

When this portion of the book was reported last week, Kelly, a retired Marine general who previously ran the Department of Homeland Security, issued a statement challenging the claim:

The idea I ever called the president an idiot is not true. As I stated back in May and still firmly stand behind: I spend more time with the President than anyone else, and we have an incredibly candid and strong relationship. He always knows where I stand, and he and I both know this story is total BS. I’m committed to the President, his agenda, and our country. This is another pathetic attempt to smear people close to President Trump and distract from the administration’s many successes.

Defense Secretary James Mattis called the quotes attributed to him as “fiction.”

The Woodward book says that at a National Security Council meeting, Trump questioned the U.S. military presence on the Korean Peninsula.

Mattis told him, “We’re doing this in order to prevent World War III,” according to the book.

After Trump left the meeting, Woodward wrote, “Mattis was particularly exasperated and alarmed, telling close associates that the president acted like—and had the understanding of—‘a fifth- or sixth-grader.’”

The book goes on to report that Mattis said, “Secretaries of defense don’t always get to choose the president they work for.”

In April 2017, Trump asked Mattis about assassinating Syrian dictator Bashar Assad after he ordered poison gas to be used on his own people.

The book reports that Dowd told the Mueller stand-in, speaking of the president: “He just made something up. That’s his nature.”

The book also says Dowd told Trump, “Don’t testify. It’s either that or an orange jumpsuit.”

Without going into detail, Dowd denied saying those things:

I do not intend to address every inaccurate statement attributed to me—but I do want to make this clear: There was no so-called ‘practice session’ or ‘re-enactment’ of a mock interview at the Special Counsel’s office. Further, I did not refer to the president as a ‘liar’ and did not say that he was likely to end up in an ‘orange jump suit.’ It was a great honor and distinct privilege to serve President Trump.

Dowd also said the Woodward book “appears to be the most recent in an endless cycle of accusations and misrepresentations based on anonymous statements from unknown malcontents.”

The Woodward book asserts that Gary Cohn, the former director of the White House’s National Economic Council, was so concerned about Trump’s withdrawing from trade deals that he “stole a letter off Trump’s desk.”

The president had planned to sign the letter, which was about leaving a trade agreement with South Korea, the book claims.

The deal that you’re talking about is the South Korea deal. I completed the deal after Gary Cohn left. We’re probably going to sign it at the United Nations in a couple weeks.

Trump hasn’t been on deep background regarding his criticism of his attorney general, Jeff Sessions. The president repeatedly has ridiculed Sessions for recusing himself from the investigation of Russian meddling in the 2016 presidential campaign.

The book claims Trump told others that Sessions was a “traitor” and said: “This guy is mentally retarded. He’s this dumb Southerner. … He couldn’t even be a one-person country lawyer down in Alabama.”

The already discredited Woodward book, so many lies and phony sources, has me calling Jeff Sessions “mentally retarded” and “a dumb southerner.” I said NEITHER, never used those terms on anyone, including Jeff, and being a southerner is a GREAT thing. He made this up to divide!

Sessions wasn’t the only Cabinet member belittled by Trump, according to the Woodward book.

Woodward’s book says Trump called his first chief of staff, Reince Priebus, a “little rat,” and told Commerce Secretary Wilbur Ross that he was “past [his] prime.”

I know this president has great respect for the men and women who serve in this Cabinet. And these accounts are very foreign to me. And I’m just not aware of instances where they’ve occurred and/or where they would occur. …

I want to stipulate that working in the White House is not for everybody. I mean, this president is tough. He’s demanding. He wants things yesterday. And I think it’s one of the reasons why we’ve accomplished so much in such a short period of time.