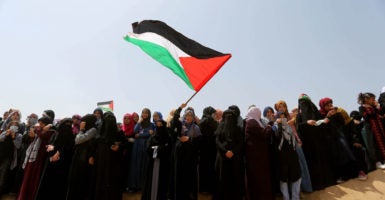 Last week, the State Department announced that the Trump administration had concluded an internal review and decided to end all U.S. contributions to the United Nations Relief and Works Agency for Palestine Refugees in the Near East (UNRWA).

Part of the administration’s justification for the decision was the disproportionate level of U.S. financial support, but the more fundamental reason to end U.S. funding lies with the many flaws that have plagued the U.N. agency for decades.

Importantly, the U.S. has made clear that the decision to end funding does not mean it is abandoning the peace process or the Palestinian people:

[T]he United States will intensify dialogue with the United Nations, host governments, and international stakeholders about new models and new approaches, which may include direct bilateral assistance from the United States and other partners, that can provide today’s Palestinian children with a more durable and dependable path toward a brighter tomorrow.

Although details were not provided, presumably, the U.S. will shift some of the agency funding to the government of Jordan and to the U.N. High Commissioner for Refugees to address the refugees and humanitarian consequences of the Syrian conflict and explore alternative ways to assist Palestinians outside of the UNRWA.

This decision is long overdue. The UNRWA has existed for more than 60 years as a “temporary” initiative to address the needs of Palestinian refugees from the 1948 Israeli-Arab conflict and to facilitate their resettlement and/or repatriation. It has evolved into a permanent institution providing services to multiple generations of Palestinian “refugees,” of whom a large majority live outside refugee camps, enjoy citizenship in other countries, or reside in the Palestinian-governed West Bank and Gaza Strip.

Despite receiving ongoing assistance from the UNRWA, the Palestinian refugee problem has only grown larger. The relief agency was set up to address a temporary crisis involving over 600,000 refugees defined as “persons whose normal place of residence was Palestine during the period 1 June 1946 to 15 May 1948, and who lost both home and means of livelihood as a result of the 1948 conflict.”

Many of these original refugees are deceased, but the refugee population has expanded to 5.3 million individuals because the UNRWA redefined and expanded its definition of “refugee.”

Today, the agency has made refugee status available to the “descendants of Palestine refugee males, including legally adopted children.” It classifies a Palestinian as a refugee even if he or she lives in the West Bank or in Gaza (territory governed by Palestinians) or earns citizenship in another country.

This is not consistent with the 1951 Convention or the policy of the U.N. High Commissioner for Refugees.

Substantial evidence indicates that the UNRWA has contributed to Palestinian extremism. For instance:

These are not new revelations. Indeed, the George W. Bush administration reportedly blocked the reappointment of head of the agency in 2005 over concerns of his bias against Israel and failure to reform the agency to address the above concerns.

Numerous restrictions and requirements now apply under law to U.S. funding for the UNRWA and other aid to the Palestinians precisely because of these concerns.

Although there is a case for implementing the defunding more gradually, the Trump administration deserves credit for its willingness to take action. Previous administrations let the fear of the unknown lead them to continue support in the face of ever-more implacable Palestinian demands and mounting evidence that U.S. taxpayer dollars were being used indirectly or diverted to support Palestinian extremism and violence.

The U.S. has been enormously generous to the UNRWA, providing it with hundreds of millions of dollars annually—more than $6 billion since 1950. Unfortunately, that support did not bring the situation any closer to resolution.

On the contrary, it cemented the status quo and absolved Palestinian leaders of the responsibility to provide health care, education, and other basic services that sovereign governments—which the Palestinians claim to be—are expected to provide for their own people.

Contrary to the claims of the Palestinians, the U.S. is not “violating international law” by ending funding for the UNRWA. U.S. funding is voluntary, not a legal entitlement, and America reasonably expects that its support not be misused and that the Palestinians earnestly engage in the peace process.

Instead, Palestinian leaders have rejected increasingly generous offers since the 1990s. This intransigence, encouraged by Iran and rejectionist Arab leaders, lies at the root of the Palestinian refugee problem and harms the Palestinian people.

Continuing the status quo will only ensure that the UNRWA and the Israeli-Palestinian conflict continue their current dissatisfactory trajectories. Although it will likely cause short-term ramifications, the decision to defund this agency will, hopefully, force all parties to re-evaluate their underlying assumptions and refocus attention on what is necessary to end this protracted dispute.

Eleven Priorities on International Organizations for the Trump Administration