She’s Allergic to Grass Pollen, and the Local Government Is Forcing Her to Grow Turf Grass 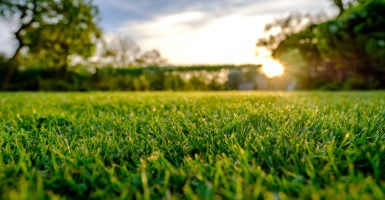 Carl and Janice Duffner face cumulative penalties of more than 20 years in prison and $180,000 in fines if they lose in the 8th U.S. Circuit Court of Appeals. (Photo: Nickbeer/Getty Images)

For four years, Carl and Janice Duffner of St. Peters, Missouri, have been fighting the city’s enforcement of a mandate to grow turf grass in their yard despite Janice Duffner’s grass pollen allergy.

Now facing potential cumulative penalties of more than 20 years in prison and $180,000 in fines, the Duffners’ case is pending before the 8th U.S. Circuit Court of Appeals, where they are arguing that the mandate to cover half of their lawn in allergens violates their state and federal constitutional rights.

Whatever comes of those claims, the city’s enforcement action may violate Duffner’s rights under the Americans with Disabilities Act.

In Title II of the Americans with Disabilities Act, Congress barred state and local government entities from discriminating against individuals with certain disabilities through any services and activities, including the enforcement of an ordinance.

According to the Asthma and Allergy Foundation of America, the law “protects people with asthma and allergies even if reactions or attacks happen only when triggered. The Americans With Disabilities Act can help to create an environment where patients can avoid their triggers.” Fortunately for the Duffners, that extends to the place where people most want and expect to escape their “triggers”—in their own home.

In Dadian v. Village of Wilmette (2001), the 7th U.S. Circuit Court of Appeals recognized that local government officials “must reasonably accommodate a qualified individual with a disability by making changes in rules, policies, practices, or services, when necessary,” to avoid mistreating a homeowner with a disability.

That case involved a couple in their 70s who, having lived in the same home for nearly 40 years, wanted to build a new garage and much shorter driveway because Dadian’s osteoporosis and asthma prevented her from walking farther without risk of injury.

When they learned a local ordinance barred their plans and local officials refused a requested waiver, the Dadians challenged the ordinance in federal court.

Judge Ann Claire Williams wrote for a three-judge panel of the 7th Circuit that an accommodation such as the requested waiver is necessary if it “will affirmatively enhance a disabled plaintiff’s quality of life by ameliorating the effects of [her] disability” without seriously undermining the purpose of the rule.

The 8th Circuit has cited the Dadians’ case before (in EEOC v. Wal-Mart Stores, Inc., (2007), stating that if local officials claim they cannot reasonably accommodate a disabled individual without jeopardizing public safety, then they need to prove as much at trial.

According to St. Peters officials, the grass mandate was enacted to prevent the spread of “noxious and invasive weeds and vegetation,” “vermin and other pests”—not exactly public enemy No.1, but a plausible public health concern.

A federal district court noted the city failed to support those interests at trial.

Instead, the mandate was seemingly “enacted for aesthetic reasons” after some locals groused over a home with manicured mixed landscaping throughout the yard but no turf grass.

That sounds a lot like the Duffners’ yard, which the city has admitted is scrupulously maintained and far from an eyesore.

No noxious weeds and vermin there.

Still, when the Duffners requested a waiver from the mandate, the city refused, ordering them to cover at least 5 percent of their yard in turf grass.

Why the city refused an outright exemption is anyone’s guess, but it was a misstep, if the Dadians’ case is any guide.

The thorny mandate keeps residents with allergies from enjoying their yards and violates their rights under the Americans with Disabilities Act.

If Duffner’s grass allergy is protected—and the Asthma and Allergy Foundation of America says it is—and substantially impairs her major life activities around her own home, as she says it would, then St. Peters should make a more reasonable accommodation.

Ending this apparently discriminatory enforcement would bring a happy ending to a long lawsuit for all parties involved.

Local officials could still hunt vermin and weeds with Duffner as an ally, and she would have the relief she is due under federal law.