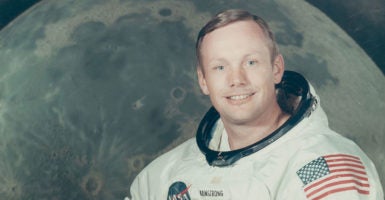 The upcoming film about American astronaut Neil Armstrong skips over arguably one of the most patriotic events in American history: astronauts planting the American flag on the moon. (Photo: SplashNews/Newscom)

The upcoming film about American astronaut Neil Armstrong skips over arguably one of the most patriotic events in American history: astronauts planting the American flag on the moon.

The biopic “First Man” premiered at the Venice Film Festival on Wednesday and the historic scene was noticeably absent.

Canadian actor and star of the film, Ryan Gosling, stood by the omission claiming that the event shouldn’t be considered an instance of American greatness, but rather an achievement for all mankind since it “transcended countries and borders,” reported The Telegraph.

“I think this was widely regarded in the end as a human achievement [and] that’s how we chose to view it,” said Gosling. “I think Neil was extremely humble, as were many of these astronauts, and time and time again he deferred the focus from himself to the 400,000 people who made the mission possible.”

The biopic is based on James R. Hansen’s authorized biography and has received the support of Armstrong’s family and of NASA.

“I don’t think that Neil viewed himself as an American hero,” Gosling continued. “From my interviews with his family and people that knew him, it was quite the opposite. And we wanted the film to reflect Neil.”

“I’m Canadian so I might have cognitive bias,” Gosling jokingly added.

“First Man” was directed by Damien Chazelle, who notably directed “La La Land.” It has received rave reviews and is already considered a contender for an Oscar. The movie premiers in theaters on Oct. 12.