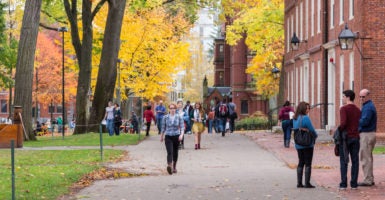 The Justice Department made news on Thursday when it filed a “statement of interest” in a long-running lawsuit against Harvard University that supported claims of Asian-American students that the university is discriminating in its admission process.

In fact, the evidence uncovered during the discovery process of the pending lawsuit seems overwhelming that Harvard is violating the Civil Rights Act of 1964 and has imposed a racial quota system, including a ceiling on the number of Asian-American students accepted, no matter how outstanding their qualifications.

The Justice Department’s filing is in opposition to a motion recently filed by Harvard asking a federal court in Boston to throw out the lawsuit without a trial.

In 2014, Students for Fair Admission filed its lawsuit under Title VI of the Civil Rights Act, which prohibits discrimination in education on the basis of “race, color, or national origin.” Although Harvard is a private university, Title VI applies because the university receives federal funds. The lawsuit claims Harvard is using its admissions policy to keep out Asian-American students in the same way it infamously discriminated against Jewish students in the 1920s and 1930s.

Harvard has fought a four-year battle during the discovery process to keep its admissions process and records secret. But the records that Harvard has been forced to produce show the university has been engaging in blatant discrimination. The evidence includes several internal reports prepared by Harvard’s own Office of Institutional Research in 2013 that concluded Harvard was discriminating against Asian-American students.

The university took steps to bury the reports and hide their findings after it became aware of the conclusions.

Asian-Americans have been only about 19 percent of the freshman class at Harvard, although that number has increased slightly since this lawsuit was filed. But that number has remained consistently the same for years despite the increasing numbers of Asian-American students applying to colleges.

Harvard’s own reports showed that Asian-Americans would comprise 43.4 percent of the class based on academics alone, and their share would be 31.4 percent even if you included the university’s preferences for athletes and legacy admissions.

Harvard admissions officers keep down the numbers of highly qualified, highly credentialed Asian-Americans by unswervingly giving them low ratings on “personal” factors—the same type of low “character” and “fitness” ratings Harvard used to prevent qualified Jewish students from getting in 100 years ago.

Harvard’s expert witness in the case claimed this was not discrimination because he accepted the assumption that white applicants have better personalities than Asian-American students. This is the type of odious and offensive ethnic stereotyping Harvard has used to justify its discrimination.

Sadly, Harvard is not alone in what it is doing. Evidence brought to light in the litigation revealed that twice a year, admissions officers from Harvard and 15 other schools—including Columbia, Cornell, Dartmouth, Massachusetts Institute of Technology, Princeton, and Stanford—get together to secretly compare their racial admission numbers to ensure they all have approximately the same racial percentages of admissions.

Another shameful example of this discrimination is MIT, my alma mater, which, when I was there, prided itself on being a place where applicants were accepted based on merit regardless of race. But, it seems, MIT began engaging in similar discrimination in the mid-1990s. The number of Asian-American students there has been stalled at about 26 percent since then.

Caltech, MIT’s big rival as a science and technology institution, has always rejected racial preferences and quotas in its admissions—and Asian-Americans now account for 43 percent of its undergraduates.

That so many other so-called “elite” universities have taken Harvard’s side by filing briefs on behalf of Harvard shows that such blatant, unlawful, and abhorrent discrimination is an accepted policy throughout higher education. It really is nothing less than a modern, politically correct version of Jim Crow in education.

Harvard and these other schools long ago abandoned Martin Luther King’s objective of achieving an America where our children are not “judged by the color of their skin, but by the content of their character.”

Everyone who abhors discrimination and believes in equal treatment should cheer the Justice Department’s intervention in this lawsuit—a lawsuit the Obama administration did its best to ignore.

The brief filed by the Justice Department makes the point that Harvard has failed to meet the legal standards outlined by the Supreme Court that allow race to be a consideration in college admissions but only under limited circumstances. Instead, the university is engaging in racial bias and racial balancing, none of which is allowed under the law.

This case is set for trial on Oct. 15 before Judge Allison Burroughs, an Obama appointee, in Boston’s federal district court. Unfortunately, this gives Harvard the home court advantage with its $37 billion endowment and the influence it wields with its alumni throughout the upper echelons of power in the city.

We will have to wait and see whether justice will prevail and whether Asian-American students finally will get what they are entitled to: the ability to apply to colleges knowing that the color of their skin won’t be used against them.