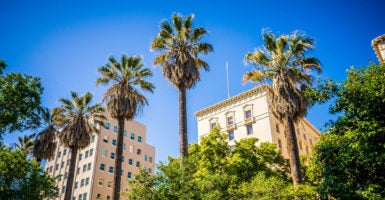 Despite a booming economy and a record-low unemployment rate nationally, at least one state has been working overtime to ensure its work-capable food stamp recipients don’t have to work.

Current law requires non-elderly, able-bodied adults without dependent children to work or participate in work-related activities, such as education and job training programs, for at least 20 hours per week in exchange for food stamp benefits.

Yet the state of California took advantage of loopholes to exempt more than 800,000 such recipients from the work requirement.

Those waivers are ripe for abuse because states have considerable latitude to create a waiver-eligible “area” that maximizes the number of food stamp recipients whose work requirements are waived.

For example, states might combine neighboring areas with relatively high unemployment rates with those that have low unemployment—so long as the average unemployment rate across the areas is at least 20 percent higher than the national average.

California did just that.

Using this mechanism in tandem with other loopholes, California was able to artificially generate an unemployment rate high enough to exempt 800,000 food stamp recipients from the work requirement.

Unfortunately, the California example is not a mere anomaly. It is indicative of a broader, national problem.

Recent research by The Heritage Foundation finds that “all eight of the statewide waivers and 1,109 of the 1,125 partial waivers in effect” are based on the problematic provision used by California. The result: “3 million work-capable adults without dependents are not working and are not required to look for work in order to receive benefits.”

Indeed, the widespread use of these waivers actively hollows out the work requirement on work-capable food stamp recipients at a time when the economy is relatively well-suited to incorporate them.

Congress has a prime opportunity to reform the food stamp program by adopting reforms proposed by the House that would require work or work activities for about 29 percent of work-capable, nonemployed adults.

The House bill also restricts the use of geographic-area waivers. These reforms constitute a first step toward the work needed to ensure the program actually helps reduce long-term poverty and dependence.

To strengthen the bill and establish meaningful work requirements for work-capable people, Congress should eliminate geographic-area waivers. These waivers do not effectively serve their intended purpose and instead enable states to game the system.

Additionally, work requirements should be expanded to able-bodied parents, exempting those with very young children. The most effective and reasonable requirements would encourage work-capable adults to enter the workforce without penalizing couples who marry.

Taken together, such reform proposals would promote human dignity and establish reciprocity between beneficiaries and taxpayers. More than 90 percent of Americans agree that able-bodied adults who receive means-tested government benefits should be required to work or prepare for work in exchange for those benefits.

In today’s strong economy, it is especially important that policy be designed to ensure that those who can work, do. Congress should start by adopting the House’s food stamp reforms as an important step toward this worthy goal.