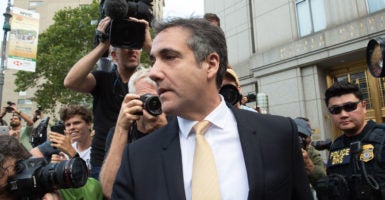 Craig Engle is a Washington lawyer who specializes in federal campaign finance law and heads the Political Law Group at Arent Fox. He worked at the Federal Election Commission, the agency responsible for enforcing federal law, and has served as the general counsel for two presidential campaigns.

He did not need to agree to either of these.

The corporate contribution charge goes like this: The National Enquirer was approached by a woman selling a story about Donald Trump. Cohen and the Enquirer discussed it, and Cohen agreed to reimburse the paper if it bought it. The paper did buy it, but Cohen didn’t.

The Justice Department, in what must be a brand new theory, says Cohen violated the law because he caused a corporation (i.e. the National Enquirer) to make an in-kind contribution to benefit the Trump campaign.

Putting aside that no campaign money actually changed hands here (and it is hard to put that aside), it is not a violation of campaign finance law to cause someone else’s corporation to spend money.

In other words, the statute polices corporations, people who accept corporate contributions, and corporate officers. Cohen is none of those three. If anyone violated the law here it would be the National Enquirer and its chairman, David Pecker. They are the ones who actually wrote the check.

But did the National Enquirer even violate election law when it wrote that check?

No. Federal law exempts from the definition of “contribution” the money that media spend on elections. The Federal Election Commission, in fact, has a proud history of defending the activities of the media, left and right, from regulation and censorship. Media decision-making is protected First Amendment activity regardless of whether it helps or hurts a candidate. And I’m sure Hillary Clinton is thankful for that.

So Michael, the only way you could have possibly violated the law is if the National Enquirer admits to violating the law too. That, as we all know, will never happen—not because Pecker has immunity, but because he has the Constitution, something for which he has often been grateful for.

The second election law charge against Cohen is that he “knowingly and willfully” made an excessive personal contribution when he paid a third party $130,000 to quiet an embarrassing claim about candidate Trump.

The words “knowing and willful” mean Cohen consciously acted in a manner he knew was in violation of the law. That’s impossible.

I talked with several other practitioners of campaign finance law and asked if they thought the payment was a crime. Some said yes, some said no, and some said they didn’t know. Hardly what you would call a clear violation of a clear law.

Even the Justice Department knows the law is unclear based on its mistrial in a nearly identical case against former Sen. John Edwards, D-N.C. There, the government’s case withered under sharp cross-examination. The verdict? The jury could not find any excessive contribution was made.

The government doesn’t have a better case here, just a weaker defendant—or maybe a weaker defense attorney. Cohen needed trial counsel that would have caught these two prosecutorial overreaches. What he got instead is a counsel running out of the courthouse yelling Trump is next.