Pakistan Is Taking a Dark Turn. It’s Time for a New US Policy. 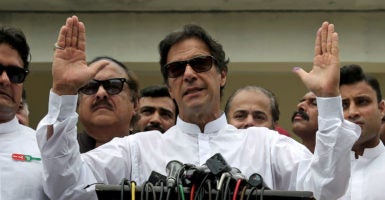 Michael Bender is an intelligence analyst for the Center for Security Policy in Washington, D.C., and a researcher on terrorist organizations, religion in politics, and South Asian security issues.

Pakistanis went to the polls last month for elections to choose their provincial and national leaders, and the results were disturbing.

Imran Khan—a 65-year-old former cricket star turned Islamo-nationalist politician—was declared the winner as the country’s new prime minister. His Pakistan Tehreek-e-Insaf party will be the majority forming a coalition in the national assembly.

The results have not passed without controversy, however. The months leading up to the election were rife with serious concerns, and the results are indicative of significant issues that point to Washington’s need for a serious reassessment of its relationship with Islamabad.

For several years now, well-founded accusations of complicity in incubating and supporting terrorism have existed against the Pakistani government by the United States, India, Afghanistan, and even certain domestic constituencies within the country itself.

At the beginning of this year, the State Department immediately suspended more than $250 million worth of security aid to Pakistan. The State Department cited the South Asian nation’s “failure to take decisive action” against various regional terrorist organizations, including the Haqqani Network and Tehreek-e-Taliban and its material support for such groups.

Those accusations were further vindicated in June when Pakistan was placed on the Financial Action Task Force’s “gray” monitoring list owing to concerns over terrorist financing.

Prior to its placement on the “gray” list, Pakistan made a move that appeared to be in accordance with the need for decisive action against domestic terrorist organizations and their affiliates.

The Election Commission of Pakistan ruled the Milli Muslim League political party ineligible to run in the July election, thereby barring it from holding political office.

The Milli Muslim League was launched in 2017 by Jamaat-ud-Dawa, the political arm of the notorious Lashkar-e-Taiba whose co-founder, Hafiz Muhammad Saeed, is the known mastermind of the Nov. 26, 2008, attacks in Mumbai.

The action was taken by Pakistan only after the U.S. included the Milli Muslim League as a part of Lashkar-e-Taiba’s designation as a Foreign Terror Organization, while several of the Milli Muslim League’s candidates merely switched parties or ran independently as a means of circumventing the ban, moves that the Pakistani government did not act against.

The Pakistani government not only fails to take decisive action against domestic terrorist entities, it routinely engages in the opposite through implicit—as well as explicit—overtures of tolerance toward such entities. In June, the Pakistani government lifted a ban on Ahle Sunnat Wal Jamaat chief Maulana Ahmed Ludhianvi, unfreezing the movement’s financial assets and allowing its leader to purchase firearms and travel abroad.

The Ahle Sunnat Wal Jamaat—formerly the Sipah-e-Sahaba Pakistan—is an ultraconservative Deobandi organization that has been designated a terrorist entity by the United Kingdom and was by the Pakistani government prior to the ban being lifted in June.

The Ahle Sunnat Wal Jamaat has a close affiliation with the Kashmiri terrorist outfit Jaish-e-Mohammad, and its splinter group Lashkar-e-Jhangvi is responsible for a multitude of terrorist attacks in Pakistan, including the 2013 attack in Quetta that killed more than 200, predominantly Shias.

Ludhianvi has long been known as a radical Sunni extremist, who the Pakistani government for several years had suspected of being linked to terrorist organizations through his role with Sipah-e-Sahaba Pakistan.

Another major component of ongoing concern is Pakistan’s military establishment, an entity that has directly ruled for approximately half of the nation’s existence, and its known relationships with several homegrown jihadi organizations.

The results of this election represent only the second civilian-to-civilian power transfer in the history of Pakistan’s existence, but reports abounded of the military’s attempt to forcibly influence certain aspects of the vote.

Pakistani soldiers created an intimidating presence with their significant numbers at polling stations across the country, and they were given broad powers to prosecute perceived “corruption” crimes on the spot at their personal discretion.

The military’s interference was also observed in media crackdowns, where censorship or shutdown was threatened toward any outlet critical of the military establishment.

The newest concern on the U.S. radar should be the national election’s biggest victor: Khan and his Pakistan Tehreek-e-Insaf party.

Khan secured his place as Pakistan’s next prime minister in the election, while his party won 116 of 267 seats to become the majority in the next ruling coalition of the national parliament.

Khan and his party have said many of the right things, and their normative appeal emanates from several sources: the staunch anti-corruption platform on which he and the party campaigned; the idea to transform Pakistan into an Islamic welfare state; and Khan’s personification as a devout Muslim.

Khan’s well-documented association with elements of Islamist radicalism, however, makes for the continuation of an unsettling reality in Pakistan.

As an ethnic Pashtun and Sharia stalwart, Khan has voiced strict support for Pakistan’s blasphemy laws, and he sympathized with the Taliban on a multitude of occasions throughout his political career, earning him the nickname “Taliban Khan” in the process.

In February, Khan’s government in Khyber Pakhtunkhwa provided hundreds of millions of Pakistani rupees in grant funding to the Darul Uloom Haqqania, nicknamed the “University of Jihad” and the alma mater of several terrorist leaders from the Haqqani Network, al-Qaeda, and the Taliban, including the latter’s infamous Mullah Omar.

More recently, Pakistan Tehreek-e-Insaf inducted Fazlur Rehman Khalil, a U.S.-designated terrorist and leader of Harkat-ul-Mujahideen, into its ranks in a move on par with many of Khan’s documented associations.

Islamist radicals openly running for office, the military’s strongarm influence and actions, and the fact that the big winner of this election is a military-approved terrorist apologist who supports extreme blasphemy laws all demonstrate a cause for serious concern over a country that is currently a major U.S. ally in the region.

The “Islamist radical” aspect of this reality in Pakistan presents a significant physical threat to U.S. personnel and allied Afghan forces in the region, given that these radicals are the same terrorist entities that the U.S. has fought against since the conflict in Afghanistan began in 2001.

Along with the military’s behavior, the Islamist radicalism aspect also presents notable concern over the normative consequences associated with legitimizing such destructive, anti-democratic ideologies and comportment in a nuclear-capable country as unstable as Pakistan.

The issues outlined here demonstrate the need for a serious review of the United States’ foreign policy toward Pakistan.

These issues are merely the most recent offenses committed by the Pakistanis in what is a detrimental pattern of behavior observable for many years now. There has been very little to demonstrate that Pakistan is ready to be a true friend to the United States, and the foreseeable future looks quite bleak in this regard.