How to Keep the US Natural Gas Boon Going 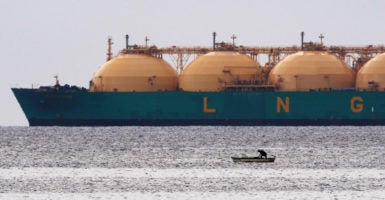 A fisherman stands in his boat as a liquefied natural gas tanker passes the coast near Havana, Cuba. (Photo: Desmond Boylan/Reuters/Newscom)

Given that the global liquefied natural gas market has become increasingly fluid and competitive, the value of U.S. liquefied natural gas exports is expected to be almost $5 billion this year. With plentiful reserves and innovative technologies that have unleashed an energy renaissance, the United States is the world’s leading natural gas producer and exporter and has a vital interest in protecting and expanding world energy trade.

In a welcome move at their July meeting in Washington, President Donald Trump and European Commission President Jean-Claude Juncker agreed to strengthen U.S.-EU strategic cooperation on energy trade, through which the EU would import more U.S. liquefied natural gas to diversify its energy supply and make it more secure.

However, U.S. law still requires prior regulatory approval for liquefied natural gas exports and constrains the timely expansion of much-needed energy infrastructure. These restrictions need to be addressed sooner rather than later so that energy companies can capitalize even further on America’s liquefied natural gas abundance and Europe’s energy demands.

The U.S. needs to make sure it does not get in its own way by keeping outdated and onerous restrictions. Regrettably, more than a dozen export facilities are awaiting permit approval from the Federal Energy Regulatory Commission. In fact, it has been three years since the commission last approved a new liquefied natural gas export terminal.

[A] burdensome environmental review process and an unnecessary public interest determination made by the Department of Energy slows the process of shipping [liquefied natural gas] to the desired destination. Both administrative and legislative reform will stimulate investment in energy in the U.S. and increase supply diversity for America’s allies, providing greater choices for consumers and creating a more mobile natural gas market. Further, empowering the states would create different and more efficient options for permitting, reducing the time frame in which [liquefied natural gas] reaches the market.

While strengthening relationships with trading partners around the world, America’s liquefied natural gas exports, supported by the timely expansion of much-needed energy infrastructure, would provide an additional boon to the economy and create more jobs.

That means, as The Economist has opined, “a cleaner world and a richer America.” The time to act on that is now.