Democrats Are Leaving Their Party in Droves. Conservatives Should Pay Attention. 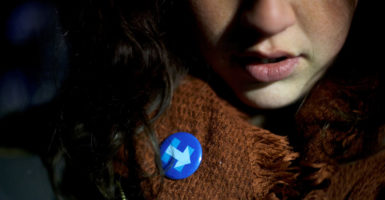 The #WalkAway Campaign Facebook group had gathered more than 172,000 members as of Aug. 22. (Photo: Mark Makela/Reuters/Newscom)

Jeff Walyus is a contributor to Potomac Tea Party’s Walk Away project.

Two thousand years ago, St. Paul found himself blinded by a bright light on the road to Damascus. The dramatic experience led him to stop persecuting his opponents and to take up new beliefs.

Today, many former leftists are taking their first steps on their own road to Damascus, and the right is not doing nearly enough to capitalize on this unprecedented mass exit from the left.

It all began just a few short weeks ago when gay New York hairdresser Brandon Straka posted a hard-hitting video explaining why he is no longer a Democrat or a liberal. Since then, his #WalkAway Campaign Facebook group has attracted more than 172,000 members. A multitude of videos from other WalkAways have been posted online.

Make no mistake, the left has been greatly rattled by all this. The left’s treatment of the #WalkAway Campaign mirrors the way it reacted to the Tea Party movement. First, it ignored it, hoping it would go away. Then it moved on to minimizing and attempting ridicule, which it has done with #WalkAway. Steven Colbert and others claimed that the #WalkAway Campaign is just run by Russian bots.

Having seen that fail, the next step was to try to co-opt it with its own movement.

Bill Scher wrote a piece in Politico inviting Republicans to become Democrats. The suggestion is that Never Trumpers should walk away from the GOP, get themselves elected as delegates to the 2020 Democratic National Convention, and thereby prevent the Democratic Party from going full-blown socialist.

Nearly every WalkAway has a unique reason for leaving the Democratic Party. Some of the most common reasons I’ve encountered are:

There are countless others. But the wellspring of the #WalkAway movement has less to do with policy than with the realization that Democrats and the left invariably use despicable methods to achieve their goals, and without remorse. To the left, winning is all that matters.

Consider these words from one WalkAway, Rebecca Meli, who posted on Facebook:

The left only cares about pitting us against each other to keep control and keeping people dependent on them. … This movement has gone right to my core. To have the privilege of watching people think for themselves and recognize the deceitful practices of the left and the manipulation of minorities has been like an awakening.

I am tired of the narrative, tired of people who don’t let you speak even if you have proof of what you are talking about, they attack you and label you as racist, closed-minded, and so on.

Many WalkAways have said it was easier to come out as gay than to come out as a conservative or libertarian. Many have even lost friends and been ostracized by family members because they decided to leave the Democrat Party.

One man, Vlad, who grew up in communist Poland, posted a YouTube video in which he compared the methods of today’s American left to the old communist government in his home country.

This is an extraordinary opportunity for conservatives, and it is not likely to come our way again in our lifetimes. Many of these WalkAways come from surprising demographics—gay people, ethnic minorities, and others.

The left worked these communities hard in amassing its power, and it is incumbent on the right to reach out to these same individuals. With the left inching ever closer to total victory, the right cannot afford to shun those who are like-minded just because they previously found themselves on opposite sides of a debate. This is a golden opportunity.

The bright light has shone. The WalkAways are on the move. We at Potomac Tea Party are doing our part to affirm their courageous personal decisions.

What will you do to get other former Democrats to Damascus?