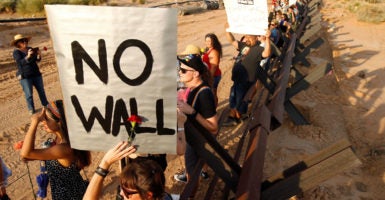 Demonstrators hold up placards during a protest against the border wall and the militarization of the border at a new section of the wall in Santa Teresa, New Mexico, as seen from the Mexican side of the border in San Jeronimo, on the outskirts of Ciudad Juarez, Mexico, on June 2, 2018. (Photo: Jose Luis Gonzalez/Reuters /Newscom)

Michael C. Burgess. a Republican, has represented Texas' 26th Congressional District in the House of Representatives since 2003. Before joining Congress, he practiced as a doctor of obstetrics and gynecology.

Each month, as many as tens of thousands stream across our southern border from Central American countries  without obtaining legal status. Thousands are unaccompanied alien children who have completed a perilous journey before even having reached the Rio Grande.

All Americans can agree that this is a problem. Our immigration system is broken.

From the numbers, we know that America is the most generous country in the world. Through our nation’s legal immigration process, we welcome well over a million immigrants—people who follow the correct immigration process and abide by our laws—into America each year.

Despite this generosity, we have a severe problem with illegal immigration. As we consider the ongoing crisis on our southern border, it is fair to ask how we got to this point.

From recent media coverage, many Americans have criticized President Donald Trump’s pursuit of a “zero tolerance” immigration policy. Yet throughout American history, there is significant evidence that this kind of “enforcement first” policy deters people from attempting dangerous journeys to reach American borders.

Let’s look back at the path that has brought us to today’s crisis.

In 1986, President Ronald Reagan signed a bill granting legal status to 2.7 million illegal immigrants in the United States. His signing of the bill was well-intentioned—it contained a provision that was meant to strengthen immigration enforcement. Yet that never amounted to much.

The amnesty actually had the reverse effect: It encouraged millions more illegal aliens to come to the U.S. in the years that followed.

Meanwhile in the ’80s, the people of Haiti suffered oppression under the dictatorship of Jean-Claude Duvalier. His regime collapsed in the late ’80s, leading to a period of economic hardship that eventually spurred many Haitians to attempt boat journeys to the United States in 1992.

During that year’s presidential election, then-Gov. Bill Clinton all but promised the Haitian people that he would stop the Bush administration’s “cruel” practice of intercepting Haitian refugees at sea and returning them home.

However, after winning the election in November, Clinton changed his mind. In a Voice of America radio address to the people of Haiti on Jan. 14, 1993, he reversed course:

For Haitians who do seek to leave Haiti, boat departure is a terrible and dangerous choice. I’ve been deeply concerned by reports that many of you are preparing to travel by boat to the United States. And, I fear that boat departures in the near future would result in further tragic losses of life. For this reason, the practice of returning those who flee Haiti by boat will continue for the time being after I become president. Those who do leave Haiti for the United States by boat will be stopped and directly returned by the United States Coast Guard.

This recently-recovered radio address makes clear that Clinton had reversed his original position on migrants. As the Chicago Tribune’s Stephen Chapman wrote at the time, “A lot of Haitians are disappointed to find [Clinton is] something less than a man of his word. They’re not the only ones.”

More recently, President Barack Obama’s administration faced a crisis in 2014 when a flood of unaccompanied alien minors came across our southern border from the same countries we are discussing today—Honduras, El Salvador, Guatemala, and Mexico. Particularly for those of us who traveled to the border at the time, there is no question that Obama’s dangerous “catch-and-release” policies helped to bring us to this point.

Presidents Reagan, Clinton, and Obama all learned the same lesson, albeit too late: Lax border security only leads to more illegal immigration.

As we consider the implications of American immigration policy on those who desire to come to this great country, we know that our rhetoric matters.

The traffickers and coyotes in Central America and Mexico use our words to prey on the disadvantaged. They encourage families to put their children on top of a freight train—the train called “La Bestia”—from southern Mexico to the Rio Grande, subjecting children to a treacherous journey that often results in traumatic amputations, robberies, sexual assaults, and some even falling to their deaths.

When we say, or even suggest, that children might receive amnesty at the border, we put innocent lives at risk. We encourage more children to take this dangerous journey.

Yet when people believe they will be blocked by border security, backed up by a robust immigration policy, they are less likely to lead themselves or their children into danger, whether it be by land or by sea.

We can be compassionate and provide a secure border at the same time. These two concepts are not mutually exclusive.

The president has said that his highest sovereign duty is to defend this nation, which includes the defense of our borders. I believe that America is a country worth defending.

During my time in Congress, I have learned that aid can be a powerful motivator for our international neighbors. As Congress determines appropriations for fiscal year 2019, I encourage all members of Congress to consider the foreign aid we will agree to send to Honduras, El Salvador, Guatemala, and even Mexico—the countries whose children are fleeing to the United States for their safety. Should we reward these countries for not taking care of their children and placing the burden on the American taxpayer?

It is simply irresponsible—it is inhumane—for the American government to incentivize anyone to subject themselves or their children to the perilous journey to our border.

Now is the time to end this broken pattern. Congress must find a solution. We must secure our borders, and we must do it soon.