100 Manufacturers Have Boosted Hiring, Expanded, or Given Raises, Bonuses Thanks to Tax Reform 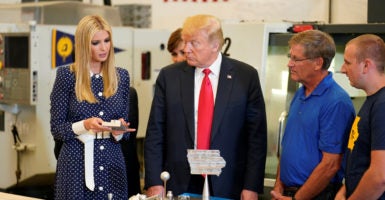 Lima Pallet Co. announced earlier this year it was adding 15 to 20 jobs as part of an expansion prompted by the 2017 tax-cut law—one of 100 manufacturers across the county identified by Americans for Tax Reform as increasing hiring, giving pay raises, or expanding their operations with new factories and equipment.

The Lima, Ohio-based business—which bills itself as a “Certified 100 percent Woman Owned Business”—manufactures custom wood pallets and crates and is investing about $500,000 in its expansion.

“Within probably the first week [of tax reform], we ended up giving all of our employees a raise, which has been much-needed,” said Tracie Sanchez, Lima Pallet co-owner and president, the local WLIO-TV reported in March. “We haven’t been able to do that for several years in a row. We also invested in some equipment.”

The Tax Cuts and Jobs Act, signed into law in December, cut corporate and individual income tax rates and eliminated some tax loopholes.

“Thanks to the tax cuts passed by the Republican House and Senate and signed into law by President Trump, manufacturers are building new facilities, purchasing new equipment, hiring new employees, and investing in current employees through bonuses and increased benefits,” a statement Wednesday from the nonprofit Americans for Tax Reform said.

Although no Democrats in the House or Senate voted in favor of the Tax Cuts and Jobs Act, it seems to be benefiting blue states as well as red states.

Rockford Ball Screw in Rockford, Illinois, was looking to hire 25 more employees to its staff of 70, the Rockford Register Star reported in June. The company’s owner credited the federal legislation for the broader expansion, which includes a 60,000-square-foot plant in Southrock Industrial Park. The company makes guide rails and ball screws, a lead screw tool that transforms rotational motion to linear motion.

In May, Atlanta-based aluminum manufacturer Novelis broke ground on a $300 million Guthrie, Kentucky, manufacturing facility that was made possible largely because of tax reform. The company estimates that it will create 125 new jobs, according to a National Association of Manufacturers report in May.

Denver-based Centennial Bolt is adding 15 employees—a 30 percent increase—and has plans to build a new plant. The company gave bonuses to employees of 5 percent of their annual salary immediately after the tax reform package passed, the manufacturers trade association reported in April.

Sabel Steel, based in Montgomery, Alabama, announced pay raises for its 230 employees, and plans to make additional hires, but didn’t specify a number, also according to the National Association of Manufacturers. The new employees will staff expanded facilities in Newnan, Georgia, and in Baton Rouge, Louisiana.