The Divisive Consequences of the Census Bureau’s Committee on Race 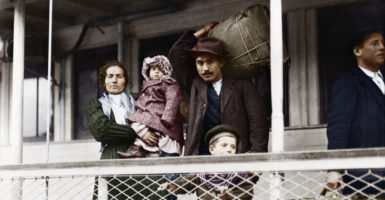 In this undated photo, a family from Italy travels by ferry from a ship to Ellis Island in Upper New York Bay, through which millions of immigrants to the U.S. passed from 1892 until 1954. (Colorized photo: Lewis W. Hine/Newscom)

Donald Trump came into the presidency promising to drain the swamp, and at least part of his legacy will be assessed on his success on that score. By the “swamp,” of course, Trump meant the networks and individuals who have captured the bureaucracy, and there’s no better example of that than the Census Bureau’s committee on race and ethnicity.

To drain the swamp, the president must tell the race and ethnicity panel, “You’re fired.”

In my new backgrounder for The Heritage Foundation, I explain why Trump should order Commerce Secretary Wilbur Ross to use his authority to terminate the committee’s charter.

Networks capture institutions, and when that happens in government, networks set policy—and it is through policy that a nation gradually is changed. The Census Bureau panel—officially called the National Advisory Committee on Racial, Ethnic, and Other Populations—has been very successful at changing the American republic.

Much controversy has arisen lately over demographic change in America. A seismic tumult—giddiness on the left and anxiety on the right—has fueled politics for years, if not decades. Both err to some degree.

The Immigration and Nationality Act of 1965 did indeed open the nation to newcomers from Asia and Africa.

An aside: Latin America often is added to this list erroneously, but in fact before the 1965 law no quotas were imposed on legal immigration from the Western Hemisphere. To be sure, authorities deported Mexicans found to be here illegally and created a program of temporary workers, both of which kept down the number of permanent residents who originated in Mexico.

The post-1965 period was by no means the first time in history that large-scale immigration brought in people hitherto unknown.

In the late 1600s and early 1700s, Germans flocked to Pennsylvania. In the mid-1800s, Germans and Irish filled our cities. And during the Ellis Island period of 1892 to 1924, the newcomers turned darker, coming in from Sicily, Greece, Armenia, the Balkans, Syria, and the East European Shtetl.

The Germans gave Benjamin Franklin the fits, the Irish led to “Gangs of New York”-style violence, and the Ellis Islanders caused even more consternation.

In 1941, sociologist Louis Wirth wrote that the Ellis Island immigrants and their children presented a problem because of their “great number, the dense concentration, and the isolated group life of some of these”—words we could hear today.

What is different between today and previous ages is that up until the 1970s, government responded by trying to alleviate the problems Wirth identified with campaigns to “Americanize” immigrants, a term used without psychological hang-ups.

From the 1970s forward, the government reaction has been to create official if synthetic ethnic categories, assign to certain of these categories the legal status of “minorities,” and award members of these groups with privileges as a consequence of group membership.

Instead of seeking unity, we have sown division, and are now reaping discord. The post-1970s policy approach could not have injected more poison into the always-emotional immigration debate if it had been devised by anti-immigration nativists.

Today’s Census Bureau committee on race and ethnicity and its direct ancestors—five different advisory panels—have been the prime promoters of this balkanization.

The first racial and ethnic advisory committee emerged in 1974, when a beleaguered Nixon administration gave in to constant mau-mauing by activists and assented to the creation of such committees. The rest followed soon after.

By the 1980s, ethnic-based push organizations such as Asian Americans Advancing Justice and the Mexican American Legal Defense and Educational Fund (to name two current members of today’s committee) had become, as sociologist Alice Robbins puts it, “influential beyond their numbers in the public policy process, as well as in influencing administrative policy regarding rules for statistical and administrative data collection and reporting.”

This is how Robbins describes how these organizations gave the spark of life to corporate identity categories that had not existed before:

This has turned America from a republic founded on the ideal that individuals are born free and equal into what Robbins terms “an interest group society.” That is as swampy as it gets.

Why did the ethnic activists insist on creating new permanent categories rather than simply have the census collect objective data on national origin? Power, money, and disdain for the Lockean model.

La Raza’s first president, Raul Yzaguirre, put it succinctly. He wrote that federal agencies had to stop classifying Hispanics under objective groups based on national origin because “there is a difference between a minority group and a national origin group—a difference recognized in terms of national economic and social policies, as well as a lengthy broad-ranging legal history relative to civil and minority rights.”

This must be stopped, now.

As the Israeli philosopher Yoram Hazony writes, groups in a balkanized state “have no way of attaining a mutual loyalty to one another … they cannot recognize themselves as a genuine unity, but rather as competitors, each threatened by the other.”

“If we are interested, then, in the establishment of free institutions … our first concern must be for the cohesiveness of the nation,” Hazony concludes.

Our leaders have been foolish. It’s time to drain the swamp and fire the Census Bureau’s National Advisory Committee on Racial, Ethnic, and Other Populations. Political pressure groups do not deserve special access.

Once the committee is gone, we can hope to start recreating the liberal democracy permeated with the principle of natural rights that the Founding Fathers set up.