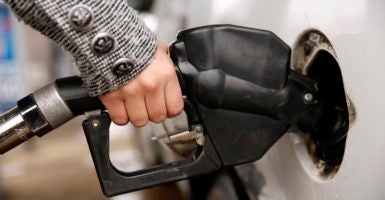 “I don’t think government should be in the business of deciding the characteristics of the vehicle you drive,” Heartland Institute's Sterling Burnett says. Pictured: A woman pumps gas in Falls Church, Virginia. (Photo: Kevin Lamarque/Reuters /Newscom)

NEW ORLEANS—Sterling Burnett doesn’t always want to sit next to someone he doesn’t know on a train, plane, or bus.

But he’s willing to fight for the freedom of those same strangers when it comes time for them to purchase a motor vehicle.

“What I care about is … your freedom to choose the vehicle of your choice,” Burnett, an environmental policy expert for the Heartland Institute, said during a panel discussion at the free-market think tank’s America First Energy Conference that took a critical look at fuel-efficiency standards for cars and trucks.

“I don’t think government should be in the business of deciding the characteristics of the vehicle you drive,” Burnett said of the so-called Corporate Average Fuel Economy standards. “That’s what CAFE standards do. Automobility is a form of freedom.”

Burnett, a senior fellow on environmental policy at the Heartland Institute, a nonprofit research and education organization based in Illinois, espoused the virtues of automotive freedom:

I take the train, I enjoy the train, and we all fly. And I take buses. But sometimes that’s not my alternative and quite frankly, I don’t always want to sit next to strangers. And maybe I want to listen to a particular kind of music or a news program, and I don’t want plugs in my ears.

When I used to commute to work, I enjoyed my time in the car because it was my time and it wasn’t dominated by work. Cars allow [you] to have the freedom to live outside of inner cities, and to visit distant relatives whenever you want. One hundred years ago, you couldn’t do this.

Congress first enacted Corporate Average Fuel Economy standards in 1975 in response to the Arab oil embargo of 1973 that limited gasoline supplies and drove up prices. The idea was to reduce American dependence on foreign oil.

The latest version of CAFE and emissions standards for light-duty vehicles is called SAFE, an acronym for Safer Affordable Fuel-Efficient Vehicles Rule for Model Years 2021-2026 Passenger Cars and Light Trucks.

The Trump administration has proposed a rule change that is a joint initiative of the Environmental Protection Agency and the Department of Transportation’s National Highway Traffic Safety Administration.

The two agencies are seeking public comment on regulatory options, according to a press release, “including a preferred alternative that locks in [model year] 2020 standards through 2026, providing a much-needed time-out from further, costly increases.”

Nick Loris, an economist with The Heritage Foundation who focuses on energy, environmental, and regulatory issues, credits the Trump administration with moving forward with a proposal that he sees as beneficial to consumers.

“Without a doubt, the Trump administration’s recent proposal is a welcome victory for consumer choice, but also for people who are just concerned about the upfront costs of new cars and new trucks,” Loris said during the panel discussion at the Heartland Institute conference.

“It would be nice if Congress demonstrated similar fortitude and recognized that energy use mandates for vehicles, for dishwashers, and [for] clocks on microwaves are all unnecessary and repealed these standards, but I think that’s wishful thinking.”

The Trump administration’s preferred alternative “reflects a balance of safety, economics, technology, fuel conservation, and pollution reduction” and is expected to reduce road fatalities and injuries, the EPA and highway safety agency say in the press release.

The rule change begins a process to create a new, 50-state standard for fuel economy and tailpipe carbon dioxide emissions for cars and light trucks with the model years 2021 through 2026.

The Obama administration permitted California to set its own auto emissions standards under a federal waiver, but the Trump administration could seek to eliminate the waiver as part of the change.

Twelve states concentrated in the Northeast and Pacific Northwest follow California’s lead with stricter emissions standards, as does the District of Columbia.

If the Trump administration proposal is implemented, California and the 12 other states would need to observe the new federal rules on emissions.

‘Relics of the Past’

Loris, the Heritage economist, described energy use mandates and CAFE standards as “relics of the past” and byproducts of “politically concocted problems” that put energy consumers at a disadvantage.

Loris said he sees a “systemic problem” in how politicians, pundits, and lobbyists view energy markets.

“The inability of the federal government and regulators to predict what’s going to happen in energy markets” often leads to counterproductive regulatory policies, he said.

For instance, Loris noted, predictions about the price of oil tend to be off the mark.

For a 2008 article, The Wall Street Journal asked “a wide range of economists, energy analysts, and other experts to predict what the price of oil would be at the end of year,” Loris recalled.

Sam Kazman, a panelist who is a lawyer with the Competitive Enterprise Institute, discussed a legal victory he secured on behalf of the Washington-based free-market public policy organization.

The court found that the National Highway Traffic Safety Administration illegally tried “to paper over” the safety issue through a combination of “fudged analysis,” “statistical legerdemain,” “lame claims,” and “specious arguments.”

But to improve public safety through CAFE standards requires officials to “get rid of a government program, rather than expanding it,” he said.

“The current standards have been a factor in the rising cost of new automobiles to an average of $35,000 or more—out of reach for many American families,” the EPA’s release says, adding:

Indeed, compared to the preferred alternative in the proposal, keeping in place the standards finalized in 2012 would add $2,340 to the cost of owning a new car, and impose more than $500 billion in societal costs on the U.S. economy over the next 50 years.

Officials also point to a study earlier this year by the highway safety agency that found newer vehicles are safer than older vehicles now on the road, and their wider use would result in fewer fatalities and injuries.

“What the Trump administration has done is stunning,” Myron Ebell, director of the Center for Energy and Environment at the Competitive Enterprise Institute, said during another panel examining the administration’s progress on energy policy.

“They have kicked California out of setting the CAFE standard,” Ebell said. “They have done everything right, and it is great for consumer choice.”