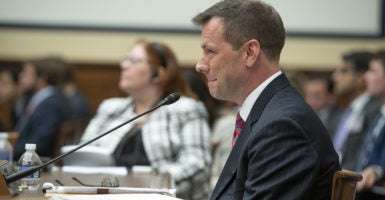 The controversies surrounding the Justice Department and FBI won’t end with the firing of veteran agent Peter Strzok, known for his bombastic text messages targeting Donald Trump during the presidential campaign and the Hillary Clinton email scandal.

Trump weighed in Monday on Twitter, noting Strzok was one of those on “a list of bad players” in the FBI and larger Justice Department.

Agent Peter Strzok was just fired from the FBI – finally. The list of bad players in the FBI & DOJ gets longer & longer. Based on the fact that Strzok was in charge of the Witch Hunt, will it be dropped? It is a total Hoax. No Collusion, No Obstruction – I just fight back!

“It’s great that Strzok was finally fired, but what we need to see is Chris Wray take action to ensure this doesn’t happen again,” von Spakovsky told The Daily Signal.

1. Will Trump Get Involved?

More transparency surrounding documents on how the investigation of Russian election meddling began, a former British spy’s salacious “dossier” on Trump, and the role of certain Justice Department officials would be welcome, said Pete Flaherty, president of the National Legal and Policy Center, a conservative government watchdog group.

“The entire matter keeps getting more curious,” Flaherty told The Daily Signal. “I don’t know if there is one vehicle to get all of the information out. One good first step would be if the president would declassify all of the documents.”

The president went on a tweet storm over the weekend regarding the FBI, writing at one point: “I may have to get involved.”

Why isn’t the FBI giving Andrew McCabe text messages to Judicial Watch or appropriate governmental authorities. FBI said they won’t give up even one (I may have to get involved, DO NOT DESTROY). What are they hiding? McCabe wife took big campaign dollars from Hillary people…..

The big story that the Fake News Media refuses to report is lowlife Christopher Steele’s many meetings with Deputy A.G. Bruce Ohr and his beautiful wife, Nelly. It was Fusion GPS that hired Steele to write the phony & discredited Dossier, paid for by Crooked Hillary & the DNC….

….Do you believe Nelly worked for Fusion and her husband STILL WORKS FOR THE DEPARTMENT OF “JUSTICE.” I have never seen anything so Rigged in my life. Our A.G. is scared stiff and Missing in Action. It is all starting to be revealed – not pretty. IG Report soon? Witch Hunt!

Nudging the Justice Department toward being more transparent to Congress and to the public through the Freedom of Information Act is within the president’s authority, von Spakovsky said.

“There is nothing wrong with this. He should,” von Spakovsky said. “The DOJ has been recalcitrant in responding to both FOIA requests, as they are required to by law, and to Congress.”

2. Will We Get Details of Lisa Page’s Testimony?

Former FBI lawyer Lisa Page, with whom Strzok reportedly was having an extramarital affair, last month testified to the House Oversight and Government Reform Committee behind closed doors.

Rep. Mark Meadows, R-N.C., called Page a “credible” witness who was cooperative. He indicated that lawmakers learned from her testimony—but didn’t provide details about what.

Strzok at first resisted testifying to the committee, but agreed upon the threat of being found in contempt of Congress.

Rep. Matt Gaetz, R-Fla., praised Page for transparency and said she was not “smug,” as Strzok was during her testimony.

Page resigned from the FBI in May.

3. Is There More to the Steele Dossier?

Earlier this month, the FBI released records to Judicial Watch, a conservative government watchdog group, about Christopher Steele, the author of a sensational anti-Trump “dossier” during the 2016 election.

Steele, a former British spy, worked with the FBI and, indirectly, with the Hillary Clinton presidential campaign.

Judicial Watch obtained the records through a Freedom of Information Act lawsuit. However, much of the material in the 71 pages was redacted.

The documents were not clear whether, or how much, the FBI paid Steele for being a confidential source. The redacted documents include payment requests and receipts submitted since Jan. 1, 2016.

It isn’t clear, however, whether any of this was related to special counsel Robert Mueller’s probe of possible connections between the Trump campaign and Russian officials.

“This is shrouded in mystery,” Flaherty said. “We still don’t know what [Steele] was authorized to do and how expensive he was.”

4. What Will Bruce Ohr’s Testimony Reveal?

The Weekly Standard reported that after the FBI terminated Steele as a source, he continued to provide information to the Justice Department through a senior department official, Bruce Ohr.

Ohr is married to Nellie Ohr, who worked at Fusion GPS, the company that paid for the Steele dossier on Trump while working for the Clinton campaign.

Ohr, then an associate deputy attorney general, reportedly interjected himself into the investigation and spoke to the FBI and Steele multiple times. He was demoted to director of the Organized Crime Task Force.

The House Oversight and Government Reform Committee and the House Judiciary Committee are scheduled to interview Bruce Ohr in a joint session Aug. 28.

DOJ official Bruce Ohr will come before Congress on August 28 to answer why he had 60+ contacts with dossier author, Chris Steele, as far back as January 2016.

He owes the American public the full truth.

“It looks as though Bruce Ohr used his position as a top Justice Department official to advance his wife’s business and the Clinton campaign through his official position in law enforcement,” von Spakovsky said.