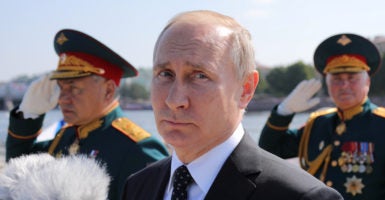 Speaking at a conference devoted to greater freedom in the energy sector, writer and editor Marc Morano also challenged the economics behind what many environmentalists term “clean energy.”

Morano, executive editor and chief correspondent of the Climate Depot website and author of the bestseller “The Politically Incorrect Guide to Climate Change,” criticized policymakers who want to regulate energy sources that are more efficient and reliable.

“If solar and wind really are competitive and there’s so much money to be made in that industry, then all they have to do is outsource it to entrepreneurs to make money,” Morano said, adding:

Instead, so-called clean energy wants to ban energy that works. It’s an insidious agenda. If you really believe in your product and want to make money, why are you going to spend all this money and issue all these regulations, shutting down coal, oil, and gas? That’s where they fail.

He and other panelists described economic and political motivations behind Russia’s aggressive response to America’s increased production of oil and natural gas. They cited figures showing the environmental movement has a significant financial advantage over skeptics who challenge what they consider alarmist positions on climate change.

Morano called attention to a new billboard along Interstate 10 in Louisiana informing motorists that congressional investigators uncovered evidence suggesting that Russian President Vladimir Putin’s government funded U.S.-based green groups as part of an effort to undermine natural gas development in America and the technology that makes it possible.

The Committee for a Constructive Tomorrow, a Washington-based nonprofit that favors a free market approach to environmental policy, is responsible for the billboard campaign. CFACT also operates the Climate Depot site.

Russia’s Response to US Innovation

Sen. Edward (Ted) Kennedy, D-Mass., and other critics at the time derided the idea as “Star Wars,” after the recent blockbuster movie.

“Why is this so important to Russia?” Morano asked his audience. “Think back to ‘Star Wars’ and Ronald Reagan and 1983, which was a very important point. Reagan gave a speech [about developing SDI], and the media went nuts and said he wanted to expand the arms race into space.”

Gorbachev tried repeatedly to persuade Reagan to drop the plans for a space-based missile shield, but to no avail, Morano said.

The Daily Signal previously reported on a former CIA analyst’s conclusion that a “money trail” stretching from the Russian government through a company in Bermuda and on to U.S. environmental groups demonstrates that activists, unknowingly or not, operate as “agents of influence” on behalf of Russia.

In his remarks at the conference, Bonner Cohen, a senior fellow with CFACT and the National Center for Public Policy Research, credited The Daily Signal for its coverage of congressional reports that describe how tens of millions of dollars may have flowed from Russia into U.S. environmental groups.

The money trail from Russia led to the Sea Change Foundation and the Energy Foundation, both based in San Francisco, Cohen said. The foundations distributed the funds in the form of grants to nonprofit environmental advocacy groups based in the U.S., including the Natural Resources Defense Council and Sierra Club, he said.

In an emailed comment to The Daily Signal for a report published in April, Roderick M. Forrest, a lawyer representing Klein Ltd., described congressional investigators’ allegations about his client as “completely false and irresponsible.” The Bermuda-based company, he said, “has no Russian connection whatsoever.”

What Do Green Activists Know About Donors?

About 300 people attended the gathering organized by the Heartland Institute, which brought together 30 speakers from government, industry, academia, and other think tanks.

“Do the ultimate recipients of this funding really know where it originated?” Cohen asked the New Orleans audience.

“I think the answer is they know what they want to know,” he said. “After all, why ask questions when the answer might prove publicly embarrassing? In other words, why bite the hand that’s been feeding, when you have been dining quite well?”

It doesn’t take a tremendous amount of imagination to figure out what the agenda is here. Moscow has an interest in preventing U.S.  fossil fuel exploration and development, simply because Russia itself is a huge producer of fossil fuels, particularly oil and natural gas. The irony of it here is that the environmental groups, which would have you believe that our use of fossil fuels is putting the planet at peril, are themselves receiving money from another country which also is a world leader in fossil fuel.

Unlike America, Russia doesn’t have a diversified economy and is heavily reliant on oil and gas to the point where the country is quite vulnerable to market disruptions, Cohen said.

Although Russia encompasses more than 6 million square miles and stretches across 11 time zones, its geographic size belies an economy only about the size of South Korea’s, he said. And in area, South Korea is only about as large as Maine.

“With the U.S. now a world leader in oil and gas, this poses a real threat to Russia in the future,” Cohen said. “Putin as a former KGB person knows statecraft very well and understands the value of using U.S. environmental groups to sway public opinion.”

Mark Mathis, president of the Clear Energy Alliance, a company devoted to educating the public about the vital role energy plays on a daily basis, also took part in the panel.

Mathis has gained notoriety for short animated videos covering a wide range of energy topics while challenging the premise of arguments made by environmentalists against the use of fossil fuels.

He made the point that the environmental movement benefits from a significant financial advantage over climate change skeptics, outspending them by a ratio of  “3,500 to 1,” according to one video.

Liberal-leaning foundations that support environmental groups have about $100 billion at their disposal, Mathis estimated. He warned that the United Nations wants to spend $76 trillion over 40 years to attack climate change.

Looking ahead to November, Mathis said he anticipates that Tom Steyer, the wealthy hedge fund manager and environmental activist, could have a significant impact on the midterm elections.

Although conservative advocates of fossil fuels such as tycoon brothers Charles and David Koch often are vilified in the press for donations to certain candidates and causes, campaign finance records show that liberal environmental activists are bigger contributors than the Koch organization.

Koch Industries, based in Wichita, Kansas, is the second-largest private company in the U.S. The Koch brothers run the company, primarily focused on petroleum refining, with Charles as chairman and CEO and David as executive vice president.

OpenSecrets.org describes the Koch brothers as among “the Republican Party’s most reliable donors.” Since the 2000 election cycle, it says, records show “people and political action committees associated with [Koch Industries] have donated at least 83 percent of their cash to Republican candidates and committees.”

Some environmental activists accuse climate change skeptics of operating as “stooges for big business,” Craig Rucker, executive director and co-founder of the Committee for a Constructive Tomorrow, told the audience at the Heartland Institute conference.

What they fail to point out, Rucker said, is that green groups typically receive more funding from businesses than do organizations such as his that support free markets and less regulation of the economy.

Rucker said environmental activists who attack private industry and organizations that don’t support their agenda practice what he calls “projectionism,” meaning they accuse others of doing what they themselves do.