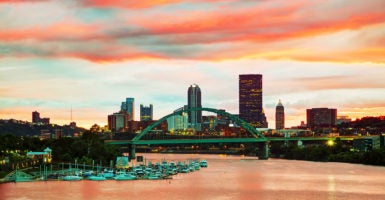 The collapse of the U.S. steel industry in the 1980s sent once-thriving Pittsburgh into a severe economic depression.

Pittsburgh has struggled to rebuild and rebrand itself for decades. Yet the city today is not the crumbling, desolate place one might expect.

In 2003, Pittsburgh was designated as financially distressed under Act 47, a Pennsylvania law that provides a broad-based program of fiscal management oversight and other technical assistance.

Under the statute, Pittsburgh restructured employee benefits, enacted fiscal reforms, and cut its workforce by more than 20 percent. In February this year, the city exited the program.

Also notable is the endurance of some free market ideas promoted and epitomized by the businessmen who made their fortunes in Pittsburgh—Carnegie, Mellon, and Heinz, among others.

The Mellon family, for example, left a legacy of philanthropy to institutions such as Carnegie Mellon University and the University of Pittsburgh.

Andrew W. Mellon, who The Economist once described as “arguably the least-known and most under-appreciated,” valued free enterprise and self-reliance. A foundation in his name promotes the humanities and supports higher education.

Leadership from such individuals enabled Pittsburgh to survive and regenerate. Their resources helped build research-focused institutions and played a key role in allowing residents the opportunity to learn new skills.

The city’s knowledge institutions gradually expanded to form the core of its cutting-edge “global innovation economy.”

The road back from economic devastation in the Rust Belt will not be easy. But Pittsburgh’s turnaround is a case that can be studied and inspire some good ideas in other cities.