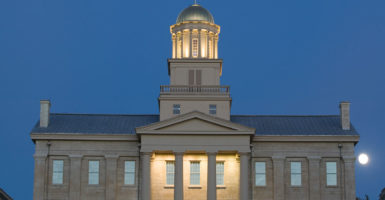 "Because we love our school, we hope it reconsiders and lets religious groups continue to authentically reflect their religious roots," club leader Kristina Schrock says. Pictured: the Old Capitol at the University of Iowa. (Photo: Walter Bibikow/ DanitaDelimont.com/Newscom)

After expelling several religion-based student groups from campus for “discrimination,” the University of Iowa is being sued for religious discrimination.

The University of Iowa chapter of InterVarsity Christian Fellowship/USA was one of the student clubs kicked off campus for not conforming to a university rule that clubs must eliminate a faith-based precondition to serve in leadership.

>>> Update Aug. 14: The University of Iowa agreed Aug. 13 to temporarily reinstate InterVarsity and other “deregistered” religious organizations, including Sikh, Muslim, and Christian groups, while the lawsuit continues, Becket Fund spokesman Ryan Colby told The Daily Signal.  “The groups will be allowed to participate in the upcoming recruitment fair,” George Carroll,  lawyer for the university, said in an email to Becket.  <<<

The lawsuit states that on June 1, the university “abruptly emailed InterVarsity’s student leaders and instructed them that they had until June 15 to change their leadership-selection practices or be deregistered.”

The group responded by “emphasizing the importance of having Christian leadership” for the Christian club, the lawsuit says, but the school rebuffed it.

“The university further stated that InterVarsity student leaders could not even be ‘strongly encouraged’ to agree with InterVarsity’s faith,” according to the suit.

The university has disallowed numerous other clubs for the same reason, including Muslim and Sikh groups, it says.

While the university singled out religious groups for supposed nonadherence with its nondiscrimination policy, Blomberg said, the school “has exempted or ignored leadership and membership restrictions set by other student groups, such as sports clubs, fraternities, and political organizations.”

The university will not comment under its policy on “pending or ongoing litigation,” Anne Bassett, the school’s media relations director, told The Daily Signal on Wednesday.

We’re grateful to have been part of the university community for 25 years, and we think that the university has been a richer place for having Sikh, Muslim, Mormon, Catholic, Jewish, atheist, and Christian groups. Because we love our school, we hope it reconsiders and lets religious groups continue to authentically reflect their religious roots.

Ryan T. Anderson, a senior research fellow at The Heritage Foundation and co-author of “Debating Religious Liberty and Discrimination,” called the case an example of “how our liberties hang—or fall—together.”

This report has been updated to reflect University of Iowa’s agreement Aug. 13 to allow “deregistered” religious groups to continue on campus while the litigation continues.