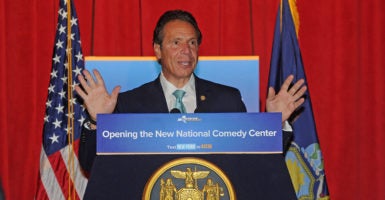 New York Gov. Andrew Cuomo welcomes state and local officials to the National Comedy Center during an opening ceremony Aug. 1 at the $50 million center in Jamestown, New York. He's not joking about taking on the NRA, though. (Photo: Dan Cappellazzo/Polaris /Newscom)

New York’s governor has made it clear that he’s on a witch hunt to put a private organization out of business.

Gov. Andrew Cuomo, a Democrat, has been in a protracted battle with the National Rifle Association. Now he’s using a state agency to hound the pro-Second Amendment organization with costly regulatory threats, as well as to convince financial institutions not to do business with the NRA.

The NRA filed a lawsuit against Cuomo and the New York State Department of Financial Services, saying, according to NPR, that the state officials are trying to “deprive the NRA and its constituents of their First Amendment rights to speak freely about gun-related issues and defend the Second Amendment.”

The financial services agency specifically targeted an NRA insurance program. Called Carry Guard, it was created to help gun owners and concealed-carry permit holders pay legal bills if they use their firearms in self-defense.

In a letter Monday, Cuomo wrote:

We discovered that the NRA was marketing insurance products for gun owners that violated numerous state laws. Insurers such as Chubb Ltd. and a broker Lockton Affinity LLC were providing illegal insurance coverage to gun owners for intentional criminal conduct resulting in bodily harm through the NRA’s Carry Guard program.

“From the outset, it was clear that the investigation was meant to advance Cuomo’s political agenda by stifling the NRA’s speech and retaliating against the NRA based on its viewpoint on gun control issues,” the NRA said in a complaint, according to The New York Times.

“If I could have put the NRA out of business, I would have done it 20 years ago,” Cuomo responded in a statement Friday.

The fact is that some of the attacks on the gun rights organization have been downright hysterical.

The NRA frequently has been called a terrorist organization by many on the left, and has come under attack from celebrities and other politicians.

However, no known NRA members have been accused of committing mass shootings, and most gun owners in general are law-abiding citizens.

A 2016 study by the Crime Prevention Research Center, a nonprofit devoted to conducting research on gun ownership, showed that concealed-carry permit holders are among the Americans least likely to commit a crime.

In fact, according to the study, they are less likely to commit crimes than police officers are.

It is also worth noting that the insurance program in New York state’s crosshairs is for gun owners who use firearms for self-defense, yet the left claims the program is for those who “murder.”

This does in some ways get to the heart of the gun debate.

While Second Amendment advocates see firearm ownership as a critical element of the right of self-defense, the left would rather see every American simply disarmed—whether criminal mass murderers or law-abiding gun owners—in their belief that this somehow would prevent all violence.

The logical end of “commonsense” gun control being mass disarmament, where only the government controls weapons.

It’s better to leave some people defenseless in the hope that bad people won’t be able to commit murders, this line of reasoning goes.

But as we’ve seen time and again, gun laws have failed to stop criminals or mass violence, leading many to believe that in a fallen world the defense against evil is citizens empowered to protect themselves and their neighbors.

As The Heritage Foundation’s Amy Swearer showed by analyzing a single month of statistics on gun use, firearms have been a particularly effective tool for citizens to prevent themselves from becoming victims.

This is why so many Americans support organizations such as the NRA, despite the incessant attacks by Cuomo and others on the left.