To Save More Lives, Reform FEMA 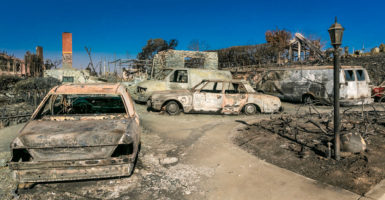 Since October 2017, California has suffered severe fires and more extensive fire-related destruction than at any other point in its history. The fires have sadly killed dozens of people, turned over 10,000 homes to ash, scattering them to ever-hotter wind.

Newspapers and first responders have decried the lack of communication among agencies, poor funding, and inadequate response systems as factors that have worsened Californians’ ability to prepare or respond. The fires, blazing even now, have left massive amounts of ash, toxic debris, and waste in their wake.

When disasters like this hit, people need immediate help. Federal and state assets can and are being deployed to stop these storms through organizations like the National Interagency Fire Center. Those displaced need shelter and basic necessities in the short term. Then, the clean-up and rebuilding must begin.

Before the 1988 Stafford Act, states and localities were largely responsible for the costs of cleaning up any natural catastrophes. With Stafford Act, the federal government became responsible to pay for at least 75 percent of any disaster costing a state over $1.46 per capita.

As of 2018, states can even get up to 85 percent if the president approves governor requests for more aid.

The result is that states, subsidized by taxpayers from other states with fewer disasters or better preparedness, are disincentivized to actively prepare for their own disasters. Knowing that federal money will come to the rescue is a powerful incentive to procrastinate on building rainy-day funds or fire-proof piggy banks. Other state concerns like health care, education, or transportation compete much more successfully for state and local policymakers’ attention.

These bad priorities are reflected in most states’ inability to comprehensively track their own disaster assistance spending. A recent Pew study found that while there are as many as 14 separate organizations that can have a hand in disaster assistance, tallying these funds is made much more difficult by poor communication, inconsistent metrics, and sometimes a complete lack of tracking.

States and the federal government would be far better equipped to respond to disasters if states did more to increase their own preparedness and disaster response capabilities.

This means changing the Stafford Act to return more responsibilities for smaller disasters to the states. That way, all states would be better prepared to face disasters, and the Federal Emergency Management Agency’s resources would be focused on the most serious of disasters. This might encourage better data tracking habits, too, along with things like better disaster response practices and oversight.

Congress should consider reforming disaster assistance by pushing more responsibility and preparedness to the states to make sure things like fires are handled in the best way possible.