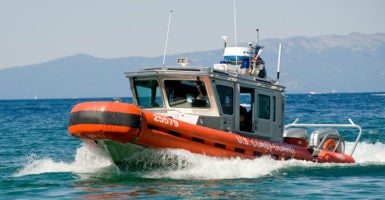 Though the modern Coast Guard was founded in 1915, its forerunner dates back to the early days of American independence. (Photo: alacatr/Getty Images)

With the Coast Guard celebrating its 103rd birthday on Saturday, Aug. 4, now is a perfect time to honor one of the most versatile armed services of the U.S. military.

While many people think of the Coast Guard as mainly saving lost boaters and arresting drug smugglers at sea, its duties and missions are much broader than that, and its history stretches back to America’s founding.

Alexander Hamilton, as our first secretary of the treasury, was given authority to maintain all U.S. aids to navigation in 1789. In 1790, he received congressional authorization to finance and build 10 cutters as a “strong right arm,” a force known as the “Revenue Marine.”

Their mission was to suppress smuggling and to ensure duties and taxes were paid—a mission they achieved by preventing ships from landing in places other than ports with collectors.

The Coast Guard that exists today was officially created in 1915, when the Revenue Cutter Service was combined with the Life-Saving Service to create a flexible force with a broad range of responsibilities and capabilities.

The service shifted and changed along with the evolving threats and challenges faced by maritime security. Just prior to World War II, Adm. Russell R. Waesche Sr., the Coast Guard commandant from 1936-1945, significantly expanded these responsibilities by receiving congressional authorization for the Coast Guard to enforce all U.S. laws at sea and in territorial waters.

In fact, the Coast Guard has served in every American conflict since World War I. During World War I, its role of ensuring maritime mobility in U.S. ports and waterways expanded considerably.

During both of these conflicts, the Coast Guard was placed under the control of the Navy, receiving more direct involvement in both World War I and World War II and taking part in every major amphibious invasion of World War II.

Over the last 70 years since World War II, its responsibilities have continued to expand significantly. Now, it functions simultaneously as an armed service, law enforcement agency, regulatory body, and member of the U.S. intelligence community. Its missions have subsequently expanded, ranging from rescuing lost boaters to conducting cyber operations and deploying globally under U.S. combatant commanders.

The Coast Guard prides itself on its ability to do more with less, as it is often funded below its requirements. This is evident in its success and work in 2017, a year that saw devastation from Hurricanes Harvey, Irma, and Maria. In the three days following Hurricane Harvey, the Coast Guard saved over 4,000 lives in Houston alone.

The man in charge of overseeing those emergency operations, Adm. Karl Schultz, just took over as the commandant of the Coast Guard in June. With a Coast Guard career of over 35 years, he has collaborated closely with the Department of Defense and the Department of Homeland Security. As the former Atlantic Area commander, he is well-qualified for this new role, and has expressed optimism that the Coast Guard is on the right track going forward.

The American public owes this service a debt of gratitude for all of the ways it keeps us safe, and it deserves the full support of those in Congress to ensure it has what it needs to complete its vital missions.