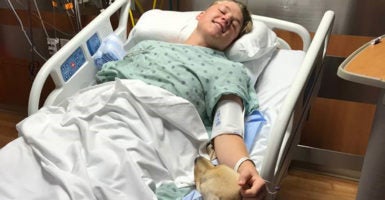 In March, 16-year-old Jeremiah Thomas was diagnosed with an extremely aggressive bone cancer. Since then, he has battled chemotherapy, radiation, a collapsed lung, paralysis, and, unfortunately, many social media trolls.

But Jeremiah also has forged an unlikely partnership with Texas Gov. Greg Abbott and forgiven those who taunt him.

With perhaps only weeks left to live, Jeremiah—a former all-star, state champion football player from Waco, Texas—has been told numerous times on Twitter, Instagram, and Facebook that he is not dying soon enough … because he took a stand for life.

“Cancer is giving your mom a late term abortion. Lmao [laughing my a– off],” one message said.

“Jeremiah … You aren’t dead yet? God do your job!” taunted another.

“Good Riddance,” another posted to Jeremiah’s prayer group page on Facebook, following with a one-star review.

Jeremiah’s mother, Kendra Thomas, quoted one person as saying Jeremiah has “a racist, homophobic, misogynistic, xenophobic, Islamaphobic [sic], hateful” agenda, and another as saying “He’s garbage and is suffering as he deserves.”

All of this because Jeremiah made a “legacy wish” through the 38-year-old Make-A-Wish Foundation.

Jeremiah’s wish was to abolish abortion, and to do so he ended up asking for a meeting with Abbott, a pro-life Republican.

Jeremiah’s father is the Rev. Rusty Thomas, director of the pro-life activist group Operation Save America, based in Dallas and formerly called Operation Rescue. The teen made his reasoning public June 24 by posting “A Letter to My Generation,” describing his Christian faith and writing in part:

One third of our generation has been wiped out due to abortion. Over 25 million people have died as a result of AIDS. Even without AIDS, the life expectancy of a homosexual man or woman is about 33 years shorter than that of a heterosexual.

We have been handed a bill of goods that has completely destroyed us. In our nation, we have chosen death and received the curse.

Jeremiah’s mother posted his story and a section of “A Letter to My Generation” to her Facebook page July 19. As of this week, it had been shared about 1,200 times and garnered 1,700 Facebook reactions.

In her post, Thomas shared Jeremiah’s struggle with his terminal illness, known as osteoblastic osteosarcoma, and the backlash he received from the left for his comments on the “culture of death.” She appealed to her audience to keep her son in prayer.

Texas homeschooler Jeremiah Thomas, dying of cancer, asks Gov. Abbott to help him in the fight to end abortion…https://t.co/MvRhM7EWmY pic.twitter.com/y9MAOMmGfy

When Jeremiah learned Make-a-Wish granted legacy wishes, he knew he wanted to use his wish to protect life. Jeremiah met with Make-a-Wish representatives and requested a sit-down meeting with Gov. Abbott. His wish was shared on Facebook. A number of people worked behind the scenes to make the governor aware of Jeremiah’s dying wish.

Gov. Abbott called Jeremiah in the hospital [June 17]. Jeremiah was able to speak to him about abolishing abortion.

Jeremiah’s family had set up a GoFundMe page three months ago to help raise money for surgery. It had reached $115,000 as of Aug. 1.

As a result of his bone cancer, Jeremiah became paralyzed from the waist down. Abbott has been paralyzed below the waist since a tree fell on him 34 years ago, when the future governor was 26.

“How would you feel if an army of abortion supporters, homosexuals, and social justice warriors flooded your child’s social media account to cyberbully him AS HE DIED?” Thomas asked in her public message July 19 on Facebook.

But while Jeremiah’s attackers were asking who is “the disgusting kid” who “could have gone to Disneyland for free,” his mother said, “Jeremiah was busy serving God.”

He spoke with the governor by phone from his hospital bed in June about passing a bill to abolish abortion in the state and make his “legacy wish” a reality.

Gov. Abbott granted Jeremiah Thomas (16) his dying wish. He called Jeremiah yesterday and promised to help abolish abortion in Texas.The Governor was gracious with his time. He listened to Jeremiah's testimony and encouraged him in his faith. Jeremiah said that the Governor was "compassionate and receptive."Jeremiah shared his heart regarding abortion. He appealed to the Governor to protect preborn babies by completely abolishing abortion by treating it as murder and penalizing it by law in the great state of Texas. Prior to the call, the Governors wife, Cecilia, reached out to Jeremiah through Facebook. She sent prayers and hugs. They both demonstrated genuine Christian love and concern for the plight of our son.#Godsgotthis#AbolishAbortionTX#GovernorAbbott#MakeAWishwww.operationsaveamerica.org

“Your wish is on the Republican Party platform position and it’s what we’re going to be pursuing this next legislative session—that’s to outlaw abortion altogether in the state of Texas,” Abbott tells Jeremiah in a now viral video of their June 17 phone conversation, referring to proposed legislation.

“And so, your wish has [been] granted,” the governor said.

A spokeswoman for the Make-A-Wish Foundation for the Central and South Texas region told The Daily Signal in a phone interview that the organization is “not politically affiliated.”

Robbie Aaron, marketing and communications manager at the foundation’s North Texas chapter, said Wednesday that the chapter set up a shopping spree for Jeremiah a couple of weeks ago.

“We don’t discriminate in wishes. It’s not our place to judge what someone wants,” Aaron said.

As Kendra Thomas wrote Friday to The Daily Signal:

Make-a-Wish told us later that they were unable to fulfill the wish because it was political. They suggested a shopping spree, which Jeremiah accepted since the governor had already called. God worked it out.

Instead of letting the hate get to him, his mother said earlier, Jeremiah shut it out, even after he recently returned home for what could be the last time.

To the surprise of some, perhaps, Jeremiah had posted a photo of himself on Instagram that showed him praying, with the caption “Anyone need prayer?”

Jeremiah’s response to those who hate him is to bless them. To pray for them.

This is what he told me[:] ‘I pity them. To have that much darkness in your heart that you’d want a kid with cancer to die. Makes me wonder what happened to them in their life.

‘It’s a scary place to be—mentally and spiritually. I pray God would have mercy on them.’

… How can a 16-year-old terminal cancer patient forgive those who wish him dead?

Jesus. Jeremiah can forgive others because he’s been forgiven.

“He was originally given a 10 percent chance of survival,” Kendra Thomas wrote to The Daily Signal. “After two countries, a border crossing, a flight on a medevac, three stays in PICU [Pediatric Intensive Care Unit],  four hospitals, and countless doctors, Jeremiah is now home on hospice.”

“We are trusting God with his life and pursuing holistic remedies,” she said. “Jeremiah is still fighting.”

This article has been updated to include Friday’s message to The Daily Signal from Jeremiah’s mother, Kendra Thomas.