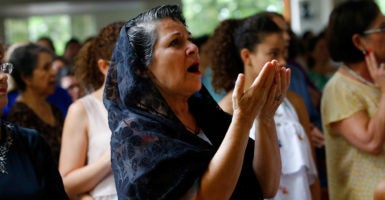 In this photo taken July 20, a woman prays at the Divine Mercy Catholic Church, which was the church where student protesters took refuge in after coming under gunfire from armed pro-government supporters on July 14, in Managua, Nicaragua. (Photo: Oswaldo Rivas/Reuters/Newscom)

Earlier this month, the Catholic Church of Divine Mercy in Managua, Nicaragua, was under siege.

For 15 hours on July 13, government-sponsored paramilitaries opened fire on student protesters at a nearby university. Students have been at the forefront of the demonstrations against Nicaraguan President Daniel Ortega since they began in April.

Explosives, snipers, and machine guns were used against the students during those 15 hours. Pastor Raul Zamora hid and prayed with the students. Church clergy took care of students who had been shot.

The standoff ended after church officials intervened and negotiated with the paramilitaries to end the shooting so they could transport the injured students to a hospital to be treated.

Even so, two students died, and dozens more were injured.

The paramilitaries and the Ortega regime’s decision to attack the church are grave examples of the situation spiraling out of control in Nicaragua. Contempt toward the church stems from its active role in protecting the student protesters.

The Catholic Church, which claims the adherence of nearly 60 percent of Nicaraguans, has become a strong defender of the activists—and as a result, an enemy of Ortega. It is mediating the national dialogue process, a forum for members of civil society and the government to pursue peace talks.

But talks with Ortega have been futile. Ortega is not interested in good-faith negotiations, but only in maintaining power. Priests have been met with violence and resistance. Churches, chapels, and entire parishes continue to be desecrated at alarming rates.

The church and its clerics have publicly denounced government corruption and called for an end to the violence.

Attacks against church officials are becoming far too common. Earlier this month, an auxiliary bishop was attacked by pro-government thugs. Death threats are also becoming rampant.

The Inter-American Commission on Human Rights enacted protective measures for Auxiliary Bishop Silvio Jose Baez Ortega—no relation to Daniel Ortega—owing to the number of death threats he was receiving. Many priests, among them Father Augusto Gutierrez, have been forced into hiding for fear of the threats being carried out.

On July 19, the anniversary of the Sandinista revolution, Daniel Ortega publicly denounced the Catholic Church. His condemnation of the church has put clergymen and parishioners at further risk.

The Trump administration has responded to the violations of religious freedom and to the crisis in Nicaragua. Vice President Mike Pence delivered a speech last week at the U.S.’ Ministerial to Advance Religious Freedom, during which he addressed the situation in Nicaragua.

Condemning the violence and other actions of the Ortega regime, Pence described it as an extreme violation of religious freedom.

The administration has also sanctioned numerous Nicaraguan government officials under the Global Magnitsky Act for their human rights violations and is providing assistance to Nicaragua’s civil society.

In a country marred with violence and instability, Nicaragua’s Catholic Church should be a place of refuge and safety. It is estimated that more than 400 men, women, and children have been killed by the government since April. Thousands more have been wounded, and an estimated 800 have disappeared and are feared dead.

As the protests continue and the situation escalates, Ortega must be held accountable for his violations of religious freedom and human rights.