NDAA Will Give Military Critical Boost in 2019 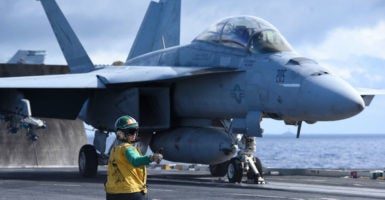 The House-approved National Defense Authorization Act for fiscal year 2019 authorizes a base budget of $639 billion for the Pentagon and the Energy Department's national security-related programs. (Photo: U.S. Navy/Sipa USA/Newscom)

The John S. McCain National Defense Authorization Act for Fiscal Year 2019, as approved in conference and passed by the House on July 26, will continue the progress begun in fiscal year 2018 in rebuilding the capacity, capabilities, and readiness of the U.S. military services.

In so doing, it will enable them to regain their competitive advantage over potential adversaries, and it will support the national defense strategy.

In a previous article, we discussed the new policy changes. We now focus on elements of military hardware and equipment.

The bill authorizes a base budget of $639 billion for the Department of Defense and the national security programs of the Department of Energy, matching the amounts allocated in the Bipartisan Budget Act, which became law in February.

With the possible return to Budget Control Act spending limits in fiscal year 2020, this increase in the 2019 authorized defense budget becomes even more critical for the nation’s military.

Some key programs addressed include:

It supports the recent Nuclear Posture Review by authorizing $65 million to develop a low-yield, submarine-launched ballistic missile, as well as $110 million above the administration’s request to revitalize the National Nuclear Security Administration’s aging infrastructure.

Recognizing the programmatic cost savings, stability effects on the defense industry, and other advantages, Congress authorized the expanded use of multiyear procurements and block buys for numerous ship, aircraft, and weapons systems.

The NDAA stays the course with the top three Air Force acquisition priorities—the F-35A Joint Strike Fighter, the KC-46 tanker, and the B-21 next-generation long-range bomber.

Unfortunately, the NDAA still prohibits the retirement of JSTARS, an outdated platform that is not survivable in a high-threat environment, until the Air Force declares ABMS Increment 2 operational.

Finally, the NDAA provides an additional $65 million above the Pentagon’s request for the A-10 wing replacement program, extending the life of the premier close air-support platform for years to come.

Congress authorized $24 billion for the construction of 13 new battle force ships, three above the Navy’s request, as well as accelerating development of several new classes of ships.

The NDAA provides the opportunity for the Navy to conduct a two-carrier buy for the third and fourth ships of Ford-class aircraft carriers, pending supporting cost-savings analysis. Procuring two aircraft carriers at once has the potential to save more than $1.6 billion.

Additionally, Congress required the Navy to include options in the planned 2019 multiyear procurement contract to buy an additional Virginia-class submarine in fiscal year 2022 and 2023.

Unfortunately, the addition of two littoral combat ships above the Navy’s request is one more than is needed to maintain the shipbuilding industrial base until the fiscal year 2020 future frigate contract award.

That also will result in a final littoral combat ship force of 35 ships, in excess of the requirement for 32. While these ships provide additional capacity toward the 355-ship goal, their limited payload and capabilities against near-peer adversaries severely limit their contribution to the national defense strategy priorities.

The House overwhelmingly approved the fiscal year 2019 NDAA by a vote of 359-54 last week, and the Senate vote is expected in August.

While the fiscal 2019 National Defense Authorization Act provides much-needed funding and new authorities to help the Pentagon rebuild the nation’s military, unless Congress can avoid another monthslong continuing resolution in fiscal year 2019 and avoid a return to the Budget Control Act limits in fiscal year 2020, the gains made over the past two years will quickly be halted or even reversed.