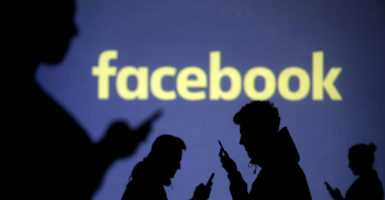 Less than a third of the way into his upcoming book on nationalism, Israeli philosopher and scholar Yoram Hazony warns about the growing censorship constricting debate in Western societies when the opinion in question runs counter to the views of politically correct liberalism.

Facebook wasted no time in making his case for him.

“There is a sense today throughout the Western world that one’s beliefs on controversial matters should no longer be discussed openly,” Hazony writes in “The Virtue of Nationalism,” to be published by Basic Books in September, adding:

We are now aware that we must think a second and third time before acting or speaking. … Genuine diversity in the constitutional or religious character of Western nations persists only at mounting costs to those who insist on their freedom.

The observation was prescient, and Hazony is now facing these costs.

Facebook has blocked ads for Hazony’s book ostensibly because, as an announcement informed him: “Your ad was not approved because your Page has not been authorized to run ads with political content.”

According to Facebook’s own definition, however, political content is support for candidates, legislation, ballot questions, etc.

Having spent part of a North Carolina family vacation wrestling with an advance galley, I can attest that “The Virtue of Nationalism” does not do that. What it does do is challenge present notions of how societies are ordered.

Hazony’s book presents three paradigms of political order: the clan-based society, the international empire, and, as the happy middle, the national state. (For those interested, the natural progression from the individual to global governance goes this way: Individuals form families, which form tribes, which form clans, which form nations, which form empires.)

The nation-state (a term Hazony purposely avoids) takes the best of the clan and the empire.

From empire it takes the idea that allegiance can be given to an abstraction rather than individuals, “the creation of a large space of domestic peace,” and impartial justice. From the clan, the nation “retains the ideal of a ruler devoted to the unique needs and interests, traditions and aspirations of a particular community that is different from all others.”

Hazony, president of the Herzl Institute in Jerusalem, takes on ideas cherished by the right and the left. He is no fan of John Locke, considered by many today as the main modern proponent of liberal democracy, natural rights, and the need for the consent of the governed.

Hazony blames Locke for the idea that individual freedom is the “only one principle at the base of legitimate political order.” Locke offered “an impoverished and unsuccessful account of human motivation and action,” Hazony says, and was rightly derided by many, from Hume to Burke.

Likewise, he demolishes the idea that Nazi Germany was the result of overwrought nationalism:

The Nazi viewpoint was precisely the opposite of this: Hitler saw his Third Reich as an improved incarnation of what he referred to as the ‘First Reich’—which was none other than the Holy Roman Empire of the Hapsburgs.

Many of these observations have been made before, though few have made them as cogently, but Hazony’s best insights involve the modern application of his ideas.

The international empire is today best exemplified by the European Union, with its usurpations of national privileges and prerogatives. The defenders of the rights of national states (remember, the best way to order society) are the bete noires of the bien pensant and the international media: states such as Israel, Poland, and Hungary.

The reader does not have to agree with everything that Hazony writes to find his book insightful and thought-provoking.

I, for example, did not like his constant portrayal of the Catholic Church as one of the liberty-stifling empires of world history. The church is a spiritual enterprise concerned with individual salvation.

Hazony takes issue with a religion’s belief that it has a monopoly on the way to salvation, seeing in that the seed of empire-making. This, perhaps, prevents him from discussing another solution to the West’s present crisis: the need for spiritual renewal through a religious awakening.

But that doesn’t matter, because Hazony’s job was to make me think, to make me wrestle with his ideas in the midst of swimming, sunning, and fishing. His job was not to provide me with a safe space. His work is a needed corrective to the steady march of global governance over the past 30 years.

In a Wall Street Journal op-ed last week, Hazony described how he went through hoops to get Facebook to approve his ads, doing everything the platform required of him. No matter: “After 10 weeks, I still have no ads.”

In the end, he wonders whether Facebook is “simply unwilling to run ads for a book about the virtues of nationalism.”

Maybe this is yet another “accidental” constraining of views on social media that run contrary to the present acceptable norm. But the lack of transparency and responsiveness from Facebook reinforces Hazony’s concerns and makes it clear that his book is timely and important.