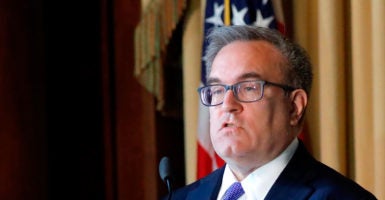 "This report details a remarkable achievement that should be recognized, celebrated, and replicated around the world," acting EPA Administrator Andrew Wheeler says. (Photo: Ting Shen/Reuters/Newscom)

Americans who value clean air and robust economic growth do not need to make an either-or choice, according to the Environmental Protection Agency’s new annual report on air quality.

The EPA report released Tuesday finds that between 1970 and 2017, the combined emissions of six main kinds of pollutants decreased by 73 percent even as the U.S. economy grew substantially over the 47 years.

Through federal and state implementation of the Clean Air Act and technological advances in the private sector, America has achieved one of the great public-private successes of our time—dramatically improving air quality and public health while simultaneously growing the nation’s population and economy.

This report details a remarkable achievement that should be recognized, celebrated, and replicated around the world. A 73 percent reduction in any other social ill, such as crime, disease, or drug addiction, would lead the evening news.

Congress originally passed the Clean Air Act in 1970, following up with major revisions in 1977 and 1990. Under the law, the EPA must rely upon scientific data to create “national ambient air quality standards” for pollutants.

Diane Katz, a research fellow in regulatory policy at The Heritage Foundation, told The Daily Signal that “less costly” alternatives to the Clean Air Act could have achieved similar results.

“Improvement in air quality is always welcome news,” Katz said in an email. “There’s no doubt that the Clean Air Act contributed to the improvement. But this improvement does not mean that other, less costly and oppressive approaches would not have achieved the same or even greater improvement.”

“After all, new technology, not regulation, is the greatest driver of environmental quality,” Katz said. “To the extent regulatory costs hinder innovation, the environment may actually suffer.”

The Clean Air Act also calls on states to formulate their own plans to upgrade and maintain air quality standards. States are responsible for emissions that cut across state lines.

The new EPA report says the environmental improvement occurred in tandem with increased economic growth as “Americans drove more miles and population and energy use increased.”

Concerned citizens and policymakers with an interest in specific pollutants and geographic locations may access interactive features that flush out the information in the EPA report.

Graphics and illustrations also highlight recent trends. For example, the section on the Air Quality Index includes a bar chart showing that the number of days of unhealthy air quality has dropped significantly in recent years.

The report cites these reductions in “key air pollutants” compared with 1990 levels:

“The Clean Air Act is woefully outdated,” Heritage’s Katz said. “At nearly 50 years old, its provisions lack the many regulatory insights we have gained over the decades. Finally, the recent focus on the act as the principle regulatory vehicle to address climate change has been a colossal waste of time, money, and effort.”

The EPA report, titled “Our Nation’s Air: Status and Trends Through 2017,” is one of several resources online that keep tabs on pollution trends and progress in improving air quality. Others include:

—EPA’s Report on the Environment