‘Undocumented Immigrant’ Is a Made-Up Term That Ignores the Law 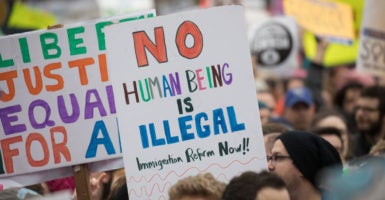 The news media is reporting that an internal email at the Justice Department has reminded its lawyers that the legally correct term they should be using in their briefs is “illegal alien,” not the euphemism “undocumented immigrant.”

The Justice Department leadership is correct. Illegal alien is the correct legal term that should be used.

“Undocumented immigrant” is a politically correct, made-up term adopted by pro-illegal alien advocacy groups and liberal media outlets to obscure the fact that such aliens have violated U.S. immigration law and are in the country illegally.

Precision in the law is a vital principle, since the exact words used in statutes, regulations, contracts, guidance documents, and policy statements can significantly affect how they are applied and interpreted.

If we are going to discuss and debate the issue of immigration and what our public policy should be, we should at least use accurate, precise terms, and talk about, for example, legal aliens vs. illegal aliens.

Government lawyers in particular have an obligation to use the correct language of the federal statutes they are sworn to uphold and enforce.

Federal immigration law uses the term “illegal alien.” For example, 8 U.S.C. §1365 is a provision that deals with a reimbursement program the federal government has for states that are incarcerating illegal aliens. Its very title refers to “illegal aliens,” and that term is used in the statute itself, which defines an illegal alien as anyone “who is in the United States unlawfully.”

In 2015, U.S. District Court Judge Andrew Hanen pointed this out in his decision granting an injunction against the implementation of President Barack Obama’s Deferred Action for Parents of Americans and Lawful Permanent Residents, the so-called DAPA program.

As Hanen said in a footnote:

The Court also understands that there is a certain segment of the population that finds the phrase ‘illegal alien’ offensive. The court uses this term because it is the term used by the Supreme Court in its latest pronouncement pertaining to this area of the law. See Arizona v. U.S., 132 S. Ct. 2492 (2012).

Hanen was, of course, correct in his assessment. The Supreme Court used the term “illegal alien” not only in that case, but in numerous prior decisions, some of which are cited in Arizona v. U.S.

Under federal law, any individual in this country who is not a citizen is an alien. And any alien who is here without permission is here illegally. End of story.

But of course, the propaganda war in the public arena cares little for facts and actual statutory language.

Pro-illegal alien groups, politicians who push “sanctuary” policies and open borders, and protesters who want to abolish the Immigration and Customs Enforcement agency, want to persuade the American public that those here illegally are no different than those who followed the rules to come here lawfully.

Using terms like “undocumented immigrant” is intended to blur and extinguish the line between legal and illegal immigration.

Advocates for illegal aliens want to stifle debate by making the false claim that if you are against “undocumented immigrants”—aka illegal aliens—you must be a racist, a nativist, or someone who hates all immigrants.

But support for legal immigration doesn’t mean we must also support illegal immigration. In fact, we have an obligation to prevent illegal aliens from breaking our laws and entering our country surreptitiously.

The term “illegal alien” is neither dehumanizing, nor demeaning. It is the precise legal term for those whose status in this country is unlawful.

President Ronald Reagan once said that “a nation that cannot control its borders is not a nation.”

The Justice Department has a constitutional duty to enforce the immigration laws passed by Congress against illegal aliens. Basic standards of professionalism and good advocacy require that its lawyers use the legally correct and accurate language of the statutes they enforce as applied by the Supreme Court.