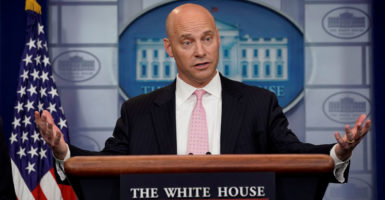 Marc Short, pictured during a White House briefing for reporters Jan. 20, 2018, sparked partisan protest at the University of Virginia after he was hired as a senior fellow at the Miller Center, which is affiliated with the school. (Photo: Yuri Gripas/Reuters/Newscom)

Eleven prominent members of the University of Virginia’s alumni network released a letter Monday afternoon expressing support for President Donald Trump’s former legislative director, Marc Short, whose hiring as a scholar at a presidential center affiliated with the university is under partisan fire.

“We join the editors of the [Richmond] Times-Dispatch to applaud your willingness thus far to stand behind Marc Short and for ‘placing education over emotion,’” the U.Va. graduates say in their letter to William J. Antholis, director and CEO of the Miller Center, who offered the one-year senior fellowship to Short.

In their letter, released at 3 p.m., Cuccinelli and the other U.Va. alumni express the importance of free speech on the Charlottesville campus, based on university founder Thomas Jefferson’s vision for the “illimitable freedom of the human mind.”

“This is the path of leadership and reason that the university is supposed to represent, and it offers hope not only for academic freedom and the free exchange of ideas, but the maintenance of a culture where dissent not only is tolerated but celebrated,” they write.

Short, 48, left the Trump administration July 20 after serving since the president’s inauguration on Jan. 20, 2017.

The Miller Center describes itself as “a nonpartisan affiliate of the University of Virginia that specializes in presidential scholarship, public policy, and political history” and “strives to apply the lessons of history to the nation’s most pressing contemporary governance challenges.”

The letter supporting Short, 48, who has a master’s degree from U.Va.,  follows high-profile protests launched against the former White House aide in recent days.

I resigned from a think tank at UVa today because I felt it betrayed its principles in giving a senior fellowship to Trump advisor Marc Short. It is a sad day for me but I’ll continue to work at UVa with brilliant colleagues in the cause of civil discourse. pic.twitter.com/HsH1pw2hXK

Hitchcock and Leffler said Short did not distance himself enough from Trump’s controversial response to the violence and one death that occurred last Aug. 12 after white nationalists rallying in Charlottesville were confronted by counterprotesters. At one point, the president blamed “both sides” for the bloodshed.

A Change.org petition against Short, which has garnered about 2,500 signatures, argues that he was hired “without broad consultation with the many stakeholders affected by that decision.”

U.Va. and the Miller Center have stood behind Short’s hiring, however.

In an “explanation” posted on the Miller Center’s website, Antholis wrote that because of the Trump connection he consulted on the hiring more than he normally would, including “other senior faculty members, senior fellows, members of the center’s Governing Council, and policy professionals from both political parties.” Antholis, who worked in the Clinton White House, added:

Those who know Marc gave him high marks for his intelligence and effectiveness, not to mention his integrity and collegiality. The decision to make this appointment was ultimately mine.

Marc joins a list of other practitioners, from both Democratic and Republican administrations, who form a critical bridge for our scholars to the policy-making community, and vice versa. …

Nearly all of my colleagues—including most of those who disagree with this appointment—share my belief that service in the Trump administration should not be a bar to service at the University of Virginia or the Miller Center.

Of the violence last summer, Antholis noted: “Our Governing Council issued a sharp denunciation of the perpetrators of those events—one that Marc [Short] has read and embraced.”

“The loss of any Miller Center faculty or staff member saddens me,” Antholis told Cavalier Daily in response to the two professors’ resignations. “As much as I respect the depth of feelings on this issue, the Miller Center’s core focus on the presidency, our commitment to nonpartisanship, and our demonstrated ability to promote civil discourse must remain our principal responsibility, especially in trying times.”