Man Changes Gender to Save on Car Insurance 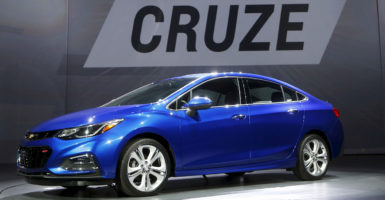 The 2016 Chevy Cruze on display at the Fillmore theater in Detroit, Michigan. (Photo: Rebecca Cook/Reuters/Newscom)

Geico’s well-advertised 15 minutes to save you 15 percent on car insurance may be one way to save money, but in Canada, one man discovered another way to make his car insurance cheaper.

After finding out that if he was a woman he would save 1,100 Canadian dollars on his car insurance, one man decided to start identifying legally as a woman.

In a story published by CBC News, a man identified only as David reveals that he changed his gender from male to female on his government-issued documents to get cheaper car insurance.

David, a resident of the Canadian province of Alberta, wanted to buy a new Chevrolet Cruze. After calling his auto insurance company, David says he was informed that he would have to pay 4,500 or so Canadian dollars a year in insurance costs for the new car. When he asked what the rate would be if he was a woman, he says he was told 3,400 Canadian dollars.

After asking a doctor for a note saying he wanted to be a woman, David succeeded in getting the provincial government of Alberta to change his gender on his birth certificate to female. He also changed his driver’s license, and told the insurer he was now a woman. He was able to get a new car insurance policy that saved him an estimated 91 Canadian dollars per month.

David told CBC News that he didn’t legally change his gender to “point out how easy it is,” nor did he do it to “criticize or ridicule transgender or LGBT rights.”

“On the one hand, this runs the risk of trivializing the profound suffering that people with gender dysphoria experience, of making it seem that people just willy nilly ‘choose’ to identify as transgender. On the other hand, though, it does highlight just one of the many public policy problems with ‘gender identity’ laws, where an individual’s say-so makes it so,” said Ryan T. Anderson, a senior research fellow at The Heritage Foundation, and author of “When Harry Became Sally: Responding to the Transgender Moment.”