Newt Gingrich Gets Real With Left-Wing Illegal Immigrants: ‘You Must Be an American Citizen to Vote’ 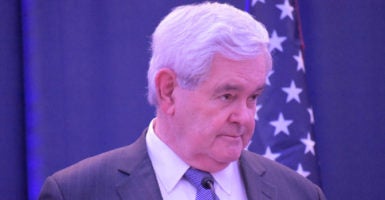 “A sound immediate step would be for Congress to pass a law reaffirming that you must be an American citizen to vote in all American elections," former Speaker of the House Newt Gingrich says. (Photo: Kyle Mazza/ZUMA Press/Newscom)

Gingrich cited San Francisco as ground zero for the movement, where illegal immigrants are eligible to register and vote in local school board elections, in a Wednesday op-ed for Fox News.

“Pro-illegal immigration, sanctuary state-supporting Democratic majority in the state Legislature has no interest in enforcing the law when it’s being ignored by fellow Democrats,” Gingrich wrote.

He claims Democrats have a “long-range” plan to cement a permanent majority by stacking their voter base with non-citizens.

“The Californians who don’t support the radical views of Democrats can simply be eclipsed by non-citizen voters supporting the Democrats,” the article reads.

“This, combined with national efforts to abolish ICE (Immigration and Customs Enforcement) has lead to a showdown between federal and state governments, with law enforcement caught in the middle,” Gingrich wrote.

“A sound immediate step would be for Congress to pass a law reaffirming that you must be an American citizen to vote in all American elections,” he concluded. “Let’s see how many Democrats would oppose this simple requirement.”