Zero Tariffs and Zero Barriers Are the Way to Prosperity 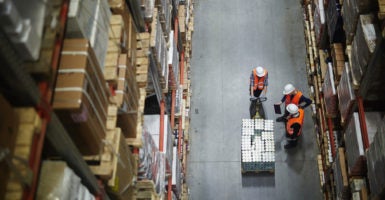 Countries with low tariffs are more prosperous than those with high, protective tariffs. (Photo: shironosov/Getty Images)

It’s not rocket science: Economists understand that tariffs harm both the exporting country and the importing country. Retaliatory tariffs do the same thing.

Yet too many foreign policymakers, after rightly warning of the harmful economic consequences of new U.S. tariffs on steel and aluminum, imposed retaliatory tariffs of their own. That’s bad—but much worse would have been to disregard President Donald Trump’s suggestion to eliminate tariffs and nontariff barriers altogether.

In a welcome move explicitly acknowledging that free and open trade is mutually beneficial, the U.S. and the European Union have now agreed to refrain from imposing tariffs and to conduct forward-looking dialogues. The stated goal of such dialogues is to pursue the elimination of all tariffs and nontariff barriers, which is not a bad outcome.

As Ed Feulner, founder of The Heritage Foundation, pointed out sensibly in his recent commentary:

Encouraging the zero-tariff option doesn’t require us to back-stop criticism of the various new and harmful tariffs implemented and proposed by the Trump administration. But it does require us to at least say, ‘Hey, that’s not a bad idea.’

Indeed, dismantling tariff and nontariff barriers across the board is good trade policy. Cutting tariffs, which are nothing more than taxes on imports, should not be a controversial issue.

As a recent study by The Heritage Foundation summarizes, there are two facts about tariffs that are nearly universally acknowledged by economists:

To enhance the freedom to trade and ensure U.S. competitiveness, policymakers should eliminate all remaining tariffs. Bill Lane, who served as a co-chairman of the Zero Tariff Coalition, sums that up nicely:

Instead of escalating what is becoming a U.S. vs. World trade war, the administration could use the current international anxiety to achieve an effective global zero-tariff accord. Even more impressive—given Mr. Trump’s skill set—I believe he could accomplish it in a year, though less ambitious agreements took nearly a decade or failed completely. After all, raising U.S. tariffs is relatively easy, as one needs only to convince Americans to pay more. Getting other countries to eliminate their tariffs is much harder. But history has demonstrated it is possible.

The new U.S.-EU agreement to move in this direction in trade talks is a great sign. Zero tariffs and zero barriers are goals well worth the effort that will be required.

Moving forward, the U.S. should seek to establish similar dialogues with other allies and eliminate steel and aluminum tariffs for all allies, including Switzerland and Taiwan.