The IRS Has Rehired Hundreds of Fired Employees. Congress Should Step In. 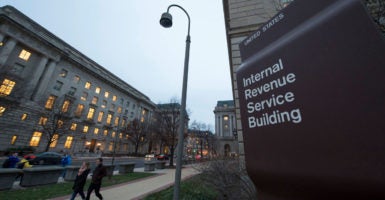 An inspector general report shows the IRS rehired more than 200 fired workers in a little over a year. (Photo: Molly Riley/TNS/Newscom)

For one of the most punitive agencies in the federal government, the IRS sure is forgiving with its own employees.

Rep. Kristi Noem, R-S.D., has proposed a bill that would prevent the IRS from rehiring employees fired for misconduct or poor performance.

According to the Treasury Department’s inspector general, the IRS did not provide officials responsible for hiring decisions with information about employment history, though that information is readily available. As a result, the IRS—an agency with nearly unrivaled access to citizens’ personal information and capacity to harass individual taxpayers—rehired:

Often, these employees do not have to wait long to get their old offices back. Two IRS employees fired for poor performance were rehired within six months.

Faced with these findings, the IRS was unapologetic. In a response letter to the Inspector General’s Office, the IRS’ chief human capital officer wrote that the IRS “determined its current process is more than adequate to mitigate any risks to American taxpayers, federal agencies, and its employees.”

Given that the IRS refuses to change its hiring process, swift congressional action is necessary. And Noem’s bill has a good chance to pass. In fact, a previous version of this legislation passed the House, 345-78, a little more than two years ago.

These inspector general reports and the IRS’ response are especially disturbing given the IRS’ extraordinary power over citizens. No department or agency should be able to rehire employees fired for misconduct or poor performance. Future legislation should make federal employees non-hirable throughout the federal government.

This may sound unduly harsh. After all, like private-sector managers, federal managers sometimes may be unfairly critical toward employees that rub them the wrong way. But, unlike in the private sector, there are multiple safeguards in place to prevent wrongful terminations.

Fired federal employees have four separate agencies to help them challenge a termination. In many cases, an employee can have multiple agencies review their case one after another. Thorough to the point of absurdity, this complicated process of appeals (which I describe here) can tie up managers, arbitrators, and administrative judges for years.

Given the incredibly high burden of firing one employee, many managers choose to ignore problem employees as long as possible. A recent survey found only 44 percent of federal employees agree that “steps are taken to deal with a poor performer who cannot or will not improve” in their workplace. On average, the federal government fires about 10,000 employees a year out of a workforce of 2.1 million.

In other words, one in every 200 federal employees is fired in a given year. Only state and local education employees have greater job security.

Given their rarity, it’s safe to assume that pink slips are well earned in the federal workforce. Recipients of this dubious distinction have gotten all the second chances they deserve. When federal employees are shown the door, they should not be let back in.

Noem’s legislation is a long-overdue correction to federal personnel practices tailored to fit workers, rather than meet the mission.