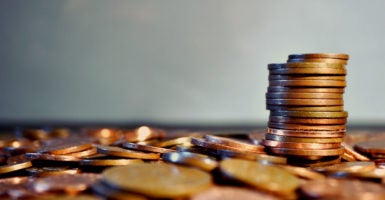 By 2025, the Pension Benefit Guaranty Corporation will only be able to pay out 10 percent of promised benefits. (Photo: Tom Hardwic/Getty Images)

Social Security is on track to run out of money by 2034, at which point the program will be able to pay only about 79 percent of its scheduled benefits.

The Pension Benefit Guaranty Corporation—a government entity that insures private pension plans—will run out of funds almost a decade earlier, in 2025, and will be able to pay only about 10 percent of its scheduled benefits.

The Pension Benefit Guaranty Corporation pays benefits if private pensions go belly up, but it is not a taxpayer-financed entity. So when it runs out of assets, it will be able to pay only as much in benefits as it takes in through premium revenues—likely 10 percent or less of insured benefits.

Without reform, many union pension plan participants will receive mere pennies on the dollar in promised benefits.

According to new data from the Pension Benefit Guaranty Corporation, multiemployer pension plans’ unfunded promises totaled an all-time high of $638 billion in 2015 (the most recent year available). That’s $638 billion the plans promised to pay their workers as part of their compensation but did not set aside to actually pay them.

A small number of large and financially troubled multiemployer pension plans could shake the system with their insolvency over the next seven years, but it’s not just a few bad actors. Union-run pension plans across the country are in terrible shape.

Particularly troubling is the fact that of the 10.3 million workers and retirees who have multiemployer pensions, 96 percent of them are in plans that have less than 60 percent of the funds necessary to pay promised benefits.

This could not happen to workers with defined contribution 401(k) or individual IRA retirement accounts that they own. Account values can vary based on contributions, market return, and investment choices, but workers know exactly how much is in their accounts and can prepare with relative certainty for retirement.

They even can use their 401(k)s to purchase annuities that will provide guaranteed income for life. Many beneficiaries of defined benefit pensions, on the other hand, have nothing more than a future claim to a first-come-first-served pool of money that almost certainly will be empty by the time they can retire.

This committee should look to enact immediate reforms that will help improve the financial status of multiemployer pension plans as well as the Pension Benefit Guaranty Corporation’s multiemployer program, without pushing any of the cost of private-sector pensions onto federal taxpayers.

That means rejecting outright any form of private pension bailout—whether that be direct cash assistance or highly subsidized loans. If the federal government doesn’t extend the same offer to all workers’ retirement plans—be they 401(k)s, IRAs, or pensions—it shouldn’t do so for a select group of private union pensions.

If Congress fails to act now to establish more solid ground for multi-employer pensions and the Pension Benefit Guaranty Corporation, workers and retirees will lose out on more than $600 billion in promised pension benefits or taxpayers will be forced to pay for the promises of private-sector unions and companies. If that happens, it will be only a down payment on the $6 trillion in unfunded state and local pension promises that will become next in line for a federal taxpayers bailout.

Congress didn’t make private pension promises, and it should not require taxpayers to stand behind them. It did establish and maintain a Social Security program that has amassed $16.1 trillion in unfunded obligations.

Recent analysis from The Heritage Foundation shows Social Security is an extremely bad deal for younger workers—most average earners could receive at least three times as much income from personal savings as they can expect to receive from Social Security.

Congress should not bail out private pensions, but it should get its own house in order by reforming Social Security to protect the most vulnerable as well as taxpayers, while freeing up resources for individuals to have more control over their retirement savings.