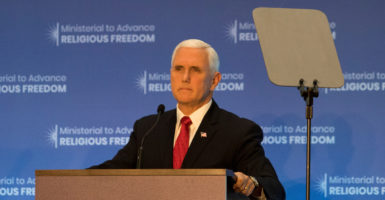 Vice President Mike Pence called out Turkey for imprisoning a Christian pastor and criticized Nicaragua for its attacks on the Catholic Church in a speech Thursday, where he also announced the Trump administration’s agenda to protect religious freedom.

“A stunning 83 percent of the world’s population live in nations where religious freedom is either threatened or even banned,” the vice president said at the Ministerial to Advance Religious Freedom. Held at the State Department, the conference convened religious leaders and rights advocates from around the world to discuss the challenges facing religious freedom.

“The victims of religious persecution face economic sanctions,” Pence added. “They are often arrested and imprisoned. They are the targets of mob violence, state sanctions terror. All too often, those who beliefs run counter to their rulers face not just persecution but death.”

Vowing the administration will never lose sight of the importance of religious freedom, Pence said it is the “first freedom of everyone in the world.”

Here are seven key points the vice president made.

He denounced the crumbling Islamic State for a “savagery unseen in the Middle East since the Middle Ages,” for the Sunni militant group’s brutal actions against Christians, Jews, Muslims, and particularly brutal treatment of Yazidis.

“The suffering of the Yazidi people, and all the victims of ISIS has sickened the American people and mobilized this president and this administration to action,” Pence said. “ … I am proud to report that ISIS is on the run, their caliphate has fallen, and I promise you, we will not rest or relent until ISIS is driven from the face of the Earth.”

Pence explained winning in combat is not enough, and the administration has committed $110 million to help persecuted religious groups rebuild. Under the Genocide Recovery and Persecution Response Program, the State Department and the U.S. Agency for International Development will partner with local faith and community leaders to deliver aid to persecuted communities, beginning with Iraq, Pence said.

The administration is also kicking off an international effort to prevent religious persecution abroad, called the International Religious Freedom Fund.

“America is proud to launch and support this program and we’re earnest in our appeal to all the nations gathered here and around the world that you might join us in this fund,” Pence said. “Together, we will champion the cause of liberty as never before.”

2. Warning to Turkey Over Jailed Pastor

Earlier Thursday, President Donald Trump threatened sanctions against Turkey for jailing an American Christian pastor, Andrew Brunson, 50. After a year and a half behind bars, Turkey transferred him to house arrest.

The United States will impose large sanctions on Turkey for their long time detainment of Pastor Andrew Brunson, a great Christian, family man and wonderful human being. He is suffering greatly. This innocent man of faith should be released immediately!

Turkish law enforcement arrested the pastor in 2016 on the charge of “dividing and separating” Turkey as part of a large-scale crackdown of thousands after a failed coup. He faces up to 15 years detention.

“To President [Recep Tayyip] Erdogan and the Turkish government, I have a message on behalf of the president of the United States of America: Release Pastor Andrew Brunson now, or be prepared to face the consequences,” Pence said to applause.

“If Turkey does not take immediate action to free this innocent man of faith and send him home to America, the United States will impose significant sanctions on Turkey until Pastor Andrew Brunson is free.”

Pence talked to the pastor’s wife, Norine, on Wednesday. The pastor’s daughter, Jacqueline, was in the audience at the State Department event Thursday.

Turkey’s Foreign Minister Mevlut Cavusoglu responded in a tweet: “No one dictates Turkey. We will never tolerate threats from anybody. Rule of law is for everyone; no exception.”

Noone dictates Turkey. We will never tolerate threats from anybody. Rule of law is for everyone; no exception.

3. ‘Waging War on the Catholic Church’

“Here in our hemisphere, in Nicaragua, the government of Daniel Ortega is virtually waging war on the Catholic Church,” Pence said.

Pence noted that 350 Nicaraguans have died in the cause of freedom this year.

“For months, Nicaragua’s bishops have sought to foster a national dialogue, following pro-democracy protests that swept through the country earlier this year,” Pence continued. “But government-backed mobs armed with machetes and even heavy weapons have attacked perishes and church property. Bishops and priests have been physically assaulted by police.”

During his speech on religious freedom, Pence criticized both countries.

“Contrasting with a thriving Christian community in South Korea, North Korea’s persecution of Christians has no rival. It is unforgiving, systematic, unyielding,” Pence said. “The mere possession of a Christian Bible is a capital offense. Those identified by the regime as Christians are regularly executed or condemned with their families to North Korea’s gulags.”

Regarding Russia, Pence noted how the Putin government has treated Jehovah’s Witnesses.

“In Russia more than 170,000 Jehovah’s Witnesses face similar persecution,” Pence said. “They are legally banned from practicing their faith. Government agents have seized Jehovah’s Witnesses headquarters near St. Petersburg, raided their prayer halls across the country, and arrested and imprisoned scores of believers.”

The vice president also raised concerns in an unexpected continent.

“Threats to religious minorities are not confined to autocracies and dictatorships,” Pence said. “They can and do arise in free societies as well. Not from government persecutions but from prejudice and hatred.”

In 2017, hate crimes against Jews were on a record high in Britain, Pence said. Meanwhile, he noted Jewish leaders in France and Germany have warned religious adherents not to wear religious identifiable clothing.

“In Europe, where religious freedom was born as a principle and enshrined in law, sadly, religious intolerance is on the rise,” he said. “Just 70 years after the Holocaust, attacks on Jews, even aging Holocaust survivors are growing at an alarming rate.”

6. Iran Regime vs. People of Iran

In Iran, where the Trump administration recently withdrew from a multilateral nuclear deal, Pence talked about oppression by the Shia majority.

“The Iranian people enjoy few, if any, freedoms, least of all the freedom of religion,” Pence said. “Christians, Jews, Sunnis, Baha’is, and other minority religious groups are denied the most basic rights enjoyed by the Shia majority, and they are routinely fined, flogged, arrested, assaulted, and even killed.”

In 2016, Iranians arrested 20 Sunni Kurds on the charge of “waging war against God,” for practicing their beliefs that didn’t conform with the Iran regime’s beliefs, Pence said.

“Even as we stand strong against the threats and malign actions of your leaders in Tehran, know that we are with you,” Pence said to the people of Iran. “We pray for you and we urge you, the good people of Iran, to press on with courage in the cause of freedom and a peaceful future for your people.”

The State Department has labeled China, the world’s most populous country, as a religious freedom violator every year since 1999.

“Together with other religious minorities, Buddhists, Muslims, and Christians, are often under attack,” Pence said.

He referred to a Buddhist monk in the crowd who has faced religious persecution, and then went on to talk about the Uighur Muslims, a group of Muslims concentrated in Asia.

“Beijing is holding hundreds of thousands and possibly millions of Uighurs Muslims in so called re-education camps, where they are forced to endure around the clock political indoctrination to denounce their religious beliefs and their cultural identity,” Pence said.