Trump Hits Roadblocks in Remaking the Nation’s Most Liberal Court 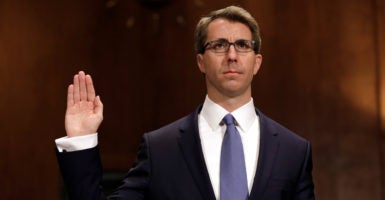 Ryan Bounds, here being sworn in May 9 for a Senate Judiciary Committee hearing, was withdrawn July 19 by President Donald Trump as a nominee for the U.S. Court of Appeals for the 9th Circuit. (Photo: Yuri Gripas/Reuters/Newscom)

President Donald Trump has had success in reshaping lower federal courts, but he has hit stumbling blocks in getting nominees confirmed to the most liberal court in the nation.

The U.S. 9th Circuit Court of Appeals, based in San Francisco, has had more rulings reversed by the Supreme Court than any other federal appeals court.

Earlier this month, the Senate confirmed a Trump nominee from Hawaii to the 9th Circuit despite heavy opposition from conservative Republicans. Trump withdrew a nominee from Oregon, however, although he was regarded as conservative.

The Senate Judiciary Committee held a hearing but has yet to vote on a third Trump nominee, from Idaho, to the 9th Circuit. Trump also nominated a fourth judge, who is from Washington state.

The 9th Circuit includes 29 judges, 16 of them nominated by Democratic presidents.

Appeals court cases typically are heard and decided by a three-judge panel, so a lopsided court can make outcomes predictable.

The 9th Circuit hears appeals from Alaska, Arizona, California, Hawaii, Idaho, Montana, Nevada, Oregon, and Washington state, as well as the territories of Guam and the Northern Mariana Islands.

“The president has a unique opportunity to bring the 9th Circuit back into the mainstream,” John Shu, a constitutional lawyer who lives in Newport Beach, California, and previously served in both the George H.W. and George W. Bush administrations, told The Daily Signal.

“He will definitely get a lot of resistance from Democratic senators,” Shu said of Trump. “But it is better to fill those seats with originalists and strict constructionists rather than people who lean liberal.”

Since Trump took office, the 9th Circuit has ruled against the administration on two key cases: its travel restrictions on terrorism-prone nations and its policy canceling the Obama administration’s Deferred Action for Childhood Arrivals program, which shields certain illegal immigrants from deportation.

The 9th Circuit is also hearing a case on the administration’s withholding of certain funds from sanctuary cities, which don’t cooperate with federal authorities in enforcing immigration law.

It just shows everyone how broken and unfair our Court System is when the opposing side in a case (such as DACA) always runs to the 9th Circuit and almost always wins before being reversed by higher courts.

A recent Senate confirmation leaves six vacancies on the court. So Trump could not flip the court to a conservative majority, but he could bring more balance and increase the chances that two of three judges who hear a case would be conservative.

Filling those vacancies in his first term is possible if Republicans keep the Senate, said Curt Levey, president of the Committee for Justice, a conservative group that monitors judicial appointments.

In September 2017, Trump nominated Assistant U.S. Attorney Ryan Bounds, of Oregon. On July 19, though, Senate Republicans decided not to hold a vote on the Bounds nomination and the White House announced it had withdrawn it.

The nomination died after objections from Sen. Tim Scott, R-S.C., regarding Bounds’ writing on racially sensitive topics during his college years at Stanford University in the 1990s.

During his confirmation hearing, Bennett tried to assure skeptical Senate Republicans that he respected Supreme Court precedent in both the Citizens United case on campaign finance and its ruling in District of Columbia v. Heller that the Second Amendment applies to an individual’s right to bear arms.

But Bennett didn’t persuade all Republicans. The Senate voted 72-27 on July 12 to confirm him, with all 27 “no” votes coming from Republicans. All 47 Democrats and the two independents supported the nomination.

“Instead of foisting ideological nominees on us, the White House should follow the Hawaii model and collaborate with home-state senators to nominate consensus judicial candidates,” she added.

The Senate should move more rapidly on all judicial confirmations, but the 9th Circuit is particularly important, said Hans von Spakovsky, a senior legal fellow at The Heritage Foundation.

“The 9th Circuit is really looked to as one of the leading circuits in the development of the law, and they have the most cases reversed by the Supreme Court,” von Spakovsky told The Daily Signal. “So, it would be nice to finally get some more conservative judges there who are actually going to follow the Constitution, as opposed to the majority there now who don’t.”

The undoing of the Bounds nomination could push the Trump White House to make further concessions with Democrats on 9th Circuit nominations, the Committee for Justice’s Levey said.

“Stopping Bounds has larger implications with regard to stumbling blocks on the 9th Circuit,” Levey said, adding:

Democrats have not defeated a [Trump] circuit court nominee on ideological grounds. This shows they can, even without a filibuster. Democrats will be encouraged by this. The question is whether it’s doable to fill these positions without consultation with Democratic senators.

On July 11, the Judiciary Committee held a hearing on Ryan Nelson of Idaho, whom Trump nominated May 15. Nelson previously served in the White House counsel’s office, as a staff lawyer for the committee, and in the Justice Department.

On July 19, Trump nominated Eric Miller of Washington state to the 9th Circuit. Miller is in the private practice of law after previously serving in the Justice Department.

Blue slips—the Senate tradition requiring an endorsement from a state’s two senators before a confirmation vote is held—continues to stall nominees because the 9th Circuit includes so many blue states, Levey noted.

“McConnell and Grassley don’t want to push too hard in doing away with the blue slip process altogether,” Levey said. “They just won’t allow it to be used in an unreasonable way.”

“Several Democrats on the Senate Judiciary Committee have a lot of seniority and therefore, a lot of power,” Shu said.