Sen. David Perdue to High Schoolers: ‘Don’t Be Embarrassed to Be Conservative’ 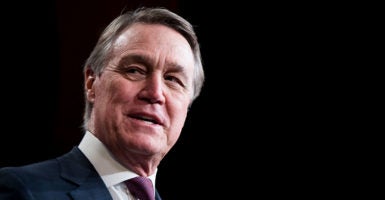 “The battle in your lifetime is going to be between countries who believe in self-determination and those that believe in statism,” Sen. David Perdue, pictured here June 19, says in a speech Tuesday to high school students gathered in Washington. (Photo: Bill Clark/CQ Roll Call/Newscom)

The only Fortune 500 CEO currently in the U.S. Senate, David Perdue, told a gathering of conservative high school students Tuesday not to be embarrassed because of their views.

“You do not have to be embarrassed to be conservative,” Perdue, R-Ga., said. “This agenda works, what we believe in works.”

“We create power vacuums if we back away from that,” he said.

Perdue, former CEO of Dollar General, never had run for political office prior to 2014, when he won the Senate seat vacated by the retiring Saxby Chambliss, a fellow Georgia Republican.

Turning Point USA aims to promote the principles of freedom, free market capitalism, and small government on college and high school campuses, according to the conservative organization’s website.

Telling the young audience that President Donald Trump’s agenda works, Perdue said that while the administration has accomplished much, it still has much to do.

“This ship has been turned, but only slightly,” the senator said. “We’ve got to develop a trend.”

Touching on many issues, Perdue told the high schoolers not to fear the challenges of today, but, quoting Ronald Reagan, to remember that “freedom is never more than one generation away from extinction.”

“America has always risen to the crisis of the day,” Perdue said. “It is our responsibility to not let that die.”

But, he said in concluding his remarks to the young crowd, they should remember that “America is the greatest country in the history of the world.”