Justice Department Weighs In to Protect Free Speech on Campus 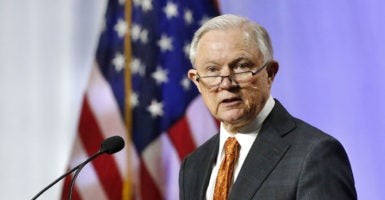 Christopher Baldacci is a member of the Young Leaders Program at The Heritage Foundation.

In the face of Orwellian speech codes on campus—and with the help of advocacy groups like Speech First Inc.—college students have been fighting to defend their First Amendment right to free speech.

Now, they can count the Justice Department as one of their strongest allies.

Earlier this year, the University of Michigan passed a policy that could punish students for making their peers feel offended. The Justice Department decided to weigh in, showing just how different the Trump administration is from the one that preceded it.

As Attorney General Jeff Sessions recently told students at the Turning Point USA High School Leadership Summit in Washington, D.C., the University of Michigan has set an improper “limitation on the right of Michigan students to be able to speak.” So last month, the Justice Department filed a “Statement of Interest” in a lawsuit that seeks to invalidate Michigan’s speech code. It’s the fourth such document it has filed in the last 12 months in an effort to aggressively defend college students’ free speech rights.

For example, the Justice Department filed a Statement of Interest in a case last year involving Pierce College in Los Angeles. There, free expression is confined to a 616-square-foot “free speech area” (just 0.003 percent of the campus), and even then, students are still required to get prior authorization from campus administrators to enter it.

The Justice Department also criticized Georgia Gwinnett College for permitting speech only in zones that covered just 0.0015 percent of the campus. Even then, no speech is allowed in that “free speech zone” that “disturbs the … comfort of person(s).” In eight years, the Obama Justice Department never once challenged such restrictions.

Hopefully, with the Justice Department now intervening, the courts will finally start striking critical blows to insidious university policies that impose a political orthodoxy on students, and limit their basic First Amendment rights to engage in vigorous debates on contentious issues.

As Sessions noted, “State universities need to be objective and fair. They need to let both people, both sides of an issue, have an opportunity to speak.”

It is not news to most Americans that colleges have been restricting the speech—especially conservative speech—of students, staff, and speakers. Sometimes this suppression comes at the hands of students, such as the rioters at the University of California, Berkeley, who prevented conservatives from giving lectures.

In these instances, school administrators have been disappointingly complicit in condoning such misbehavior and refusing to punish students and faculty who disrupt other speakers.

In other instances, the schools themselves have restricted speech on social and political issues. According to Sessions, the fact that university administrators are supporting “groups who go in deliberately to intimidate, threaten, and block a person’s right to freely discuss an issue is a threat to our freedom, and it’s contrary to the Constitution.

The University of Michigan’s speech code prohibits any speech that a listener considers “bothersome” or “hurtful.” A violation of the code can result in school punishment, including suspension or expulsion. So the most sensitive student on campus effectively can dictate the terms under which other students can speak or, as the case may be, not speak.

If that wasn’t enough, the university has organized so-called “bias response teams” made up of administrators and law enforcement to investigate any student accused of violating the speech code, whether on or off campus—and complaints can be filed anonymously.

Picture that: a team of campus officials and law enforcement officers patroling a college campus to punish speakers who have been accused of offending some student’s sensibilities. That sounds like something out of a TV show about a despotic future society.

Basically, bias response teams are the University of Michigan’s version of the thought police in George Orwell’s “1984.” It’s no wonder students claim they are afraid to speak out about controversial topics like abortion, immigration, or racial politics.

These speech restrictions continue to be implemented because a powerful group of college administrators and leftist elites have a growing contempt for the First Amendment. They simply want to silence anyone who disagrees with their views on politics and culture. They consider all speech they disagree with to be bigoted speech that constitutes real harm—just like physical violence—and should therefore be banned.

Many on the left believe that those who disagree with them on substantive issues have genuinely evil motivations and, therefore, are not entitled to the First Amendment right to disagree.

Speech codes like the one imposed by the University of Michigan, which allow a listener to determine if the speech “feels” offensive, will inevitably be weaponized against those who express disfavored political views.

Indeed, this is exactly why the Justice Department felt the need to intervene. It wrote that Michigan’s law “invites arbitrary, discriminatory, and overzealous enforcement.” It also “does precisely what the First Amendment forbids—it punishes speech merely because of the ‘listeners’ reaction.’”

It’s easier to be indifferent about these speech codes when your own views are the ones being protected. But liberal administrators should ask themselves: What if a pro-life student claimed to be distressed by Planned Parenthood passing out flyers on a campus quad? What if a Christian student felt persecuted by a public debate about the existence of God? Would these students get the same support from the university? Even if they did, it would only prove that a feelings-based approach to free speech creates an endless mess in which no one’s speech is ever fully protected.

Americans of all creeds and political views should fight to oppose these restrictions. They are truly Orwellian and un-American. The university of all places—especially the public university—should be a place where free speech is defended, where open dialogue and intellectual debate ought to be the modus operandi.

The First Amendment doesn’t lose its power when speech becomes offensive. It was actually written to protect speech that could be perceived as offensive. After all, why do popular speakers need the protection of law? No one threatens their ability to speak.

The Bill of Rights exists to protect the weak from the strong, the minority from the majority, and the unpopular from the popular. The right of the 49 percent to speak out against the 51 percent is what makes us a free country.

When a state school can punish speakers for nothing more than hurting someone’s feelings, the First Amendment has been utterly gutted—and students who are citizens protected by the Constitution have been robbed of their fundamental right to disagree.