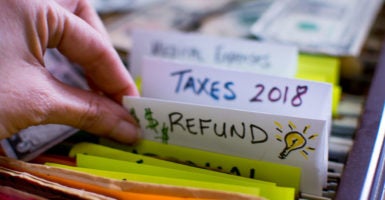 You’ve probably heard about last year’s tax reform—the bill that cut Americans’ taxes in 2018 by about $1,400.

What you might have missed is that all of those tax cuts for individuals are set to expire in less than eight years. That might sound far off in the future, but it’ll come faster than we think.

Republicans currently control both chambers of Congress. Why not just go ahead and make the tax cuts permanent now?

That’s exactly what House Republicans proposed on Tuesday, along with two other important reforms. Although many of the specific details are still being developed, the framework provides an outline of reforms that will benefit all Americans.

The House Ways and Means Committee’s framework for Tax Reform 2.0 calls for “locking in the individual and small business tax cuts” to “provide certainty for our families, workers, and Main Street small businesses.”

This is a good first priority. Congress should make the already agreed upon provisions in the tax bill permanent. A permanent version of the Tax Cuts and Jobs Act could grow the size of the economy by 2.8 percent over what was expected before tax reform. That’s thousands of dollars of additional income per American household more than what is currently forecasted.

Simply by making the temporary provisions permanent, Congress could achieve an additional 60 percent of the economic benefit produced by last year’s tax overhaul.

Yet many Americans, especially those employed by small businesses, don’t take advantage of these plans due to their complexity and high compliance costs. Simplifying retirement savings rules and including a new universal savings account where funds are not reserved strictly for retirement would further allow people to save, no matter what they’re saving for.

The 2017 reforms modified college savings or “529” plans, allowing parents to use money in these accounts for K-12 expenses. It was a good step forward. As noted in the 2.0 framework, lawmakers should take the next step and allow the money saved in these accounts to go toward homeschool, career, and technical education expenses. This would help parents to pay for education options outside the public school system, giving them more choice in their children’s education.

The 2.0 framework’s least detailed section proposes to “help brand-new businesses write off more of their initial start-up costs, and remove barriers to growth.”

The focus here should be to expand and make permanent expensing. Expensing allows businesses to deduct their costs immediately. The old tax law made businesses wait years before deducting their investment costs from their taxable income. This had the effect of needlessly increasing the cost of investing in everything, from new equipment and machinery to expanding existing workspace or even building new facilities.

Expensing makes it more affordable for new businesses to open and for mature businesses to upgrade and expand their operations—something that results in more jobs and enables employers to raise wages.

But last year’s reforms didn’t extend to all types of investments, such as manufacturing floor space and storefronts. To further facilitate economic growth that helps American workers, Tax Reform 2.0 should allow expensing for all investments. Paired with a permanent tax code, this change could more than double the 2017 tax reform’s increase of gross domestic product.

The 2017 Tax Cuts and Jobs Act did not just benefit a select few. The average taxpayer in every single congressional district in the U.S. gets a tax cut this year. The Ways and Means framework works to make sure that holds true—and gets even better—for every year into the future.