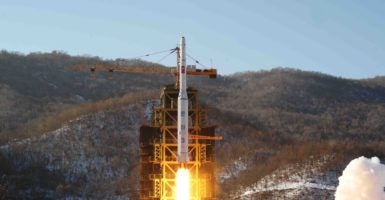 The dismantlement is a welcome, though limited, development, because Pyongyang indicated the site was no longer necessary after having successfully completed its missile and nuclear programs.

In April, North Korean leader Kim Jong Un declared that “we no longer need any nuclear tests, midrange and intercontinental ballistic rocket tests, and the nuclear test site in the northern area has also completed its mission.”

In recent years, Pyongyang shifted its focus away from missiles requiring a fixed launch site, such as that at Sohae, and developed missiles launched from mobile vehicles. Mobile missiles, including two intercontinental ballistic missile variants that can reach the entire continental United States, are more difficult to track and target during hostilities.

The apparent dismantlement, like the earlier destruction of the tunnel entrances to the nuclear test site, is being done without foreign on-site inspectors. More importantly, neither activity reduces the North Korean arsenal, nor diminishes missile or nuclear weapon production capabilities.

Pyongyang still retains the same arsenal and production capabilities that it had before the U.S.-North Korean summit.

Only a few months before his meeting with President Donald Trump, Kim directed his defense industry to “modernize its production lines [and] mass produce nuclear warheads and ballistic missiles.”

North Korea’s dismantlement of Sohae could also be to put additional pressure on the U.S. to reciprocate through gestures to allay the regime’s security concerns. Pyongyang insists that Washington provide security assurances, sign a peace treaty to replace the armistice ending the Korean War, and reduce sanctions.

Washington and Pyongyang remain far apart over even the definition of “denuclearization,” let alone the sequencing, linkages, and timeline for achieving it.

North Korea’s insistence on addressing its security concerns prior to implementing denuclearization runs counter to positions taken by the Trump administration.

The huge discrepancy between U.S. and North Korean statements reveals that little actual progress has been made. Even the low-hanging fruit of returning U.S. service members’ remains and reunions of separated Korean families have become mired in Pyongyang’s characteristic stalling tactics and demands for yet more concessions.

The diplomatic path with Pyongyang remains open, but it will be far longer and bumpier than has been depicted by the Trump administration.