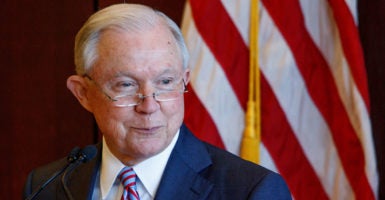 After hitting the stage to the strains of Lynyrd Skynyrd’s “Sweet Home Alabama,” Sessions told the crowd of young people at George Washington University in Washington, D.C., that “conservatism is a way of looking at things.”

Sessions, who previously served as a Republican senator from Alabama and that state’s attorney general, said his understanding of issues as well as the strengthening of his conservatism came from reading National Review while in college and high school.

He challenged the audience of about 700 to read conservative publications, including National Review and The Weekly Standard.

“You need to be armed before you get to college,” Sessions said.

At one point, Sessions was interrupted when the students broke into a chant of “Lock her up.” Sessions chuckled, repeated the three words once, and said, “I heard that a long time over the last campaign.”

"Lock her up," Attorney General Jeff Sessions says with a laugh as chant breaks out during high school leadership summit. https://t.co/NkJuIoh4fP pic.twitter.com/KGIErp2efz

Sessions, 71, related how when he was growing up in the 1950s and early 1960s, progressivism was thought to be the mainstream and conservatism was on its way out, and in many ways “had less influence than it does today.”

“[The left] want to stop you from speaking, they want you to quit, they want you to abandon your values,” Sessions said, adding that it is impossible to have a “free, deliberative government without freedom of thought.”

“Freedom of speech is precious and rare in this world. It is one of the reasons that America is exceptional,” he said. “But it is also fragile.”

Sessions said the Founding Fathers had “a deep understanding of human nature” and foresaw that that nature would be a problem in maintaining a nation.

“They knew that those in power would look for ways to contain criticism, so they [could] continue in their places of power without the distraction of other opinions,” he said. “That is why they took care to enshrine the robust protections of the First Amendment in our Constitution.”

Sessions touted the Justice Department’s ongoing court battles defending freedom of speech on college campuses, including a suit against the University of California at Berkeley:

The attorney general finished his remarks by issuing a challenge to the high school students to “speak the truth, even where it is unpopular,” and to learn about the Constitution.

“There is no more important time to be in the trenches than when on defense, when the enemy is charging at you,” he said. “Clear and consistent pounding away at the truth usually produces victory.”